Store Page
Black Mesa >  Workshop > PSR Digital's Workshop
This item has been removed from the community because it violates Steam Community & Content Guidelines. It is only visible to you. If you believe your item has been removed by mistake, please contact Steam Support.
This item is incompatible with Black Mesa. Please see the instructions page for reasons why this item might not work within Black Mesa.
Current visibility: Hidden
This item will only be visible to you, admins, and anyone marked as a creator.
Current visibility: Friends-only
This item will only be visible in searches to you, your friends, and admins. 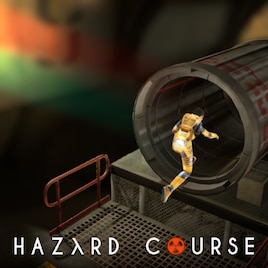 PSR Digital
Offline
See all 424 collections (some may be hidden)

This item has been added to your Subscriptions. Some games will require you to relaunch them before the item will be downloaded.
Description
Hazard Course
Hazard Course features a complete re-creation of Half-Life's training level, including new dialogue and voice acting, HD models, textures, and detailed environments.

Overview
Developed by PSR Digital, Hazard Course is an add-on for Black Mesa centered around a completely new take on Half-Life's training level, "Hazard Course", featuring 6 maps, a wealth of new models and textures, an expanded introduction and outro sequence (based on the sequence exclusive to the PS2 version of Half-Life), and tons of new dialogue from the entire Black Mesa voice cast.

To play this map pack from the beginning, press the "Steam Workshop" button in the main menu, select "Hazard Course", and start Chapter 1.

If you would like to skip the introductory scene, press the "Steam Workshop" button in the main menu, select "Hazard Course", and start Chapter 2.

To play the Five Nights at the Hazard Course bonus minigame, press the "Steam Workshop" button in the main menu, select "Hazard Course", and start Chapter 3.

For more information about Five Nights at the Hazard Course, including how to play and what the controls are, see this FAQ thread.

when i enter the ladder room it kills me
Boundingflea117

mR_kAt Sep 17 @ 3:44am
I agree. I had to turn on captions to understand some lines before the hazard course began. Once it started, they were clear enough via loudspeaker.

Liquid Blitz Sep 16 @ 7:10pm
Really enjoyed this. I must point out a problem however, there seems to be a large variation of voice line volumes with NPC's. Some are *far* too quiet, some are loud, and everything in between. Some normalization would be nice.

[USN] SpyFreakAR15™ Sep 5 @ 12:56am
Trying to get the BMCE to work with it. Having half the scientists and security guards covered in blood kinda breaks the immersion.