Store Page
Black Mesa >  Workshop > Chris Bryant's Workshop
This item has been removed from the community because it violates Steam Community & Content Guidelines. It is only visible to you. If you believe your item has been removed by mistake, please contact Steam Support.
This item is incompatible with Black Mesa. Please see the instructions page for reasons why this item might not work within Black Mesa.
Current visibility: Hidden
This item will only be visible to you, admins, and anyone marked as a creator.
Current visibility: Friends-only
This item will only be visible in searches to you, your friends, and admins. 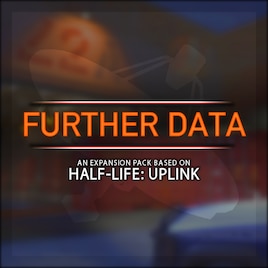 Mr. GameCrazy
Offline
See all 292 collections (some may be hidden)

This item has been added to your Subscriptions. Some games will require you to relaunch them before the item will be downloaded.
Description
Further Data is a brand new take on Half-Life: Uplink - Valve's demo of Half-Life. It's a personal project of mine featuring new maps, new voice lines, and miscellaneous assets.

To play, press the "Steam Workshop" button on the main menu and Further Data will appear. If you use the old UI, use the command "map fd01".

Epilepsy Warning
There is a brief scene of flashing that's a bit harsher than usual BM gameplay. I've toned it down for the public release. This occurs immediately after the intro text. Taking a few steps forward will trigger an event that causes the screen to flicker black for about 5 seconds.

Credits
The project was mostly solo as I created all maps and assets myself, however I did have other assorted help.

cobraregala2013 7 hours ago
is there an uplink mod that includes it between black mesa chapters like the uplink mod for the og half life?

Kevin 18 hours ago
How do I d/l a game through "Workshop"? A bit confusing.

Chris Bryant  [author] Sep 11 @ 9:01pm
No, unfortunately something in the spirit of that was on the roadmap but I cut it for time reasons.

BugDug Trincado Sep 11 @ 10:12am
is the vending machine that explodes in the start of the original hl uplink in here? because i cant find it

jakestritty Aug 16 @ 6:41pm
Could you add the scene where scientists are shot against the wall like in original?

Chris Bryant  [author] Jul 11 @ 6:05pm
Hey, thankies for the feedback! I made a deliberate decision to leave those scenes out because the amount of work to include them in a well-polished manner unfortunately wouldn't have been worth it. Black Mesa is very resistant and finnicky, even the grunt getting eaten by a barnacle took a LOT of hack work to make function. I shudder to imagine the days I would have lost trying to work those scenes in. Not to mention that I'm just not an animator. There's just no way those scenes were gonna happen in a one-man project, with results I'd be comfortable with releasing. That said, I'm glad you think the bulk of it was great nonetheless, thankies!

Gas-mask Enthusiast Jul 11 @ 4:04am
Also the musics great but it also kind of ruins the creepy vibe of the zombie sections

Gas-mask Enthusiast Jul 11 @ 4:03am
This is great! But it's a bit disappointing in some areas.

Right after you move the satellite and go into the underground section the zombie isn't shown dragging a scientist and a guard (like the originall) what makes the whole thing less memorable and less scary.

And right after that you can't see the guard being dragged on top of the ladder section.

Really annoyed that the best parts of the original isn't in the remake.

Erick Mar 25 @ 4:49am
Just can't find how to start this mod nor Stojkeholm. I subscribed to both of them but now I am stuck
< >