Store Page
Tabletop Simulator >  Workshop > stocktigon's Workshop
This item has been removed from the community because it violates Steam Community & Content Guidelines. It is only visible to you. If you believe your item has been removed by mistake, please contact Steam Support.
This item is incompatible with Tabletop Simulator. Please see the instructions page for reasons why this item might not work within Tabletop Simulator.
Current visibility: Hidden
This item will only be visible to you, admins, and anyone marked as a creator.
Current visibility: Friends-only
This item will only be visible in searches to you, your friends, and admins. 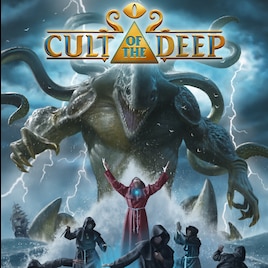 LittleHouseBoardgames
Online
See all 15 collections (some may be hidden)

This item has been added to your Subscriptions. Some games will require you to relaunch them before the item will be downloaded.
Description
Cult of the Deep is a hidden role dice game for 4-8 players where you are a cultist trying to establish your faction's rise to power. Fight over rituals and mythical monsters as you seek victory and control of the cult.

As the High Priest, your role is the only one revealed as you seek out to destroy the corruption of Cabalists and Heretics.

The Faithful are there to help and protect the High Priest and make sure their plans are not interrupted.

Cabalists are looking for power and what better way to achieve it than killing the High Priest and taking it for yourselves.

The Heretics just want to watch the world burn. Your loyalty lays not with anyone but yourself. Destroy the cult and be the last one standing or just destroy the cult with yourself included. Either way, you win.

When you die, the cult is not done with you. You will seek to haunt allies and enemies alike during your search for victory as a wraith.

For more info or subscribe to our monthly newsletter, you can visit us at https://bagamesco.com

Links for Cult of the Deep
Duke of BAzlandia
< >
10 Comments

DarkArcher1898 May 5 @ 4:47pm
Just played a game this past weekend at the Great Plains Games Festival and had a blast!!! so happy there's a mod for TTS on here, i look forward to the games that B.A. comes up with and puts out in the future.

stocktigon  [author] Nov 25, 2020 @ 2:08am
Thank you! More than happy to set-up times with people to teach the game if anyone is interested. You can post here, our Facebook group or any other social media account listed.