Store Page
Rivals of Aether >  Workshop > hyuponia's Workshop
This item has been removed from the community because it violates Steam Community & Content Guidelines. It is only visible to you. If you believe your item has been removed by mistake, please contact Steam Support.
This item is incompatible with Rivals of Aether. Please see the instructions page for reasons why this item might not work within Rivals of Aether.
Current visibility: Hidden
This item will only be visible to you, admins, and anyone marked as a creator.
Current visibility: Friends-only
This item will only be visible in searches to you, your friends, and admins. 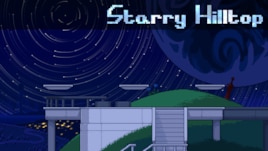 hyuponia
Offline
See all 1852 collections (some may be hidden)

This item has been added to your Subscriptions. Some games will require you to relaunch them before the item will be downloaded.
Description
The visions dancing in my mind
The early dawn, the shades of time
Twilight crawling through my windowpane

Am I awake or do I dream?
The strangest pictures I have seen
Night is day and twilight's gone away


(v1.7: playing on this stage with Jirachi present might give this stage a special visual effect...)
(v1.4: practice mode radio)
(v1.3: basic form sprite tweak, massive optimization (but not TOO much sadly) )
(v1.2: new basic form, sides are solid now - and new default music! i got permission so i can put the intended themes in now)
(v1.1: automatic optimize mode implemented)

Starry Hilltop. for 1 year anniversary of Acid Rainbows ( https://steamcommunity.com/sharedfiles/filedetails/?id=1894194148 ), my debut creation for the RoA workshop.
Thank you all for supporting me and Acid Rainbows til now.
also a reminder that Acid Rainbows' design is by Kaggysmilk. I only made her into a playable forme for RoA workshop.
but she is indeed important for me.

featuring a laststock variant.
use right stick (c-stick) at the beginning of the match for additional musics.

The_RKader Mar 20 @ 2:55am
I have been trying to find on this stage for waaaaay too long. Should have scrolled further down!

Yepsy May 25, 2021 @ 7:54am
Legitmally my favorite stage, I didnt even know i had downloaded this until i played it on accident.

Barney Feb 3, 2021 @ 8:10pm
just wanted to say that this is by far one of the most visually pleasing stages to come out of not just rivals, but fighting games as a whole. 10/10, would set as my wallpaper.

just thinking maybe you could make the practice mode radio a little clearer? i spent a bit of time trying to figure out how to change the music before realising i had to be near it to change tracks

Taktaagic Feb 2, 2021 @ 8:40am
This is my favourite stage in Rivals right now, and is probably gonna be my favourite forever. Great job!