Store Page
Garry's Mod >  Workshop > Xalalau's Workshop
This item has been removed from the community because it violates Steam Community & Content Guidelines. It is only visible to you. If you believe your item has been removed by mistake, please contact Steam Support.
This item is incompatible with Garry's Mod. Please see the instructions page for reasons why this item might not work within Garry's Mod.
Current visibility: Hidden
This item will only be visible to you, admins, and anyone marked as a creator.
Current visibility: Friends-only
This item will only be visible in searches to you, your friends, and admins. 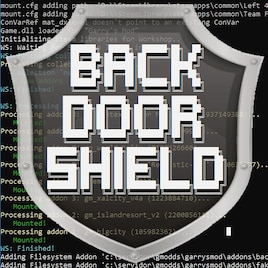 This item has been added to your Subscriptions. Some games will require you to relaunch them before the item will be downloaded.
In 1 collection by Xalalau
Brasil - Supremacia

Protect your GMod servers against backdoors!

Block, find, investigate and remove them.

Incompatibilities
Also, consider Backdoor Shield as W.I.P! Know that I don't intend to add fancy features or even make this addon user friendly, this project is a hobbyist experiment.

HOW TO USE
There are 2 operation modes in this addon: real-time detection and file scanner.

All detections are based on prohibited function call combinations or on very suspicious terms encountered when scanning "texts". Unfortunately Lua knowledge is required to understand the logs.

Real-time detection really is what it says it is, something that executes by itself while other addons are running.

But the file scanner is manual, so you have to open the console and run commands. It's advisable that this is done on a dedicated server or in lan mode, as in singleplayer the game will practically freeze until the scan ends.

OK. So it's possible to search for threats in common GMod locations and files using this one:

And for a complete scan, able to read all GMod mounted folders and extensions, there's also:

Note that both commands accept paths as arguments, so it's possible to do a targeted scan. E.g: 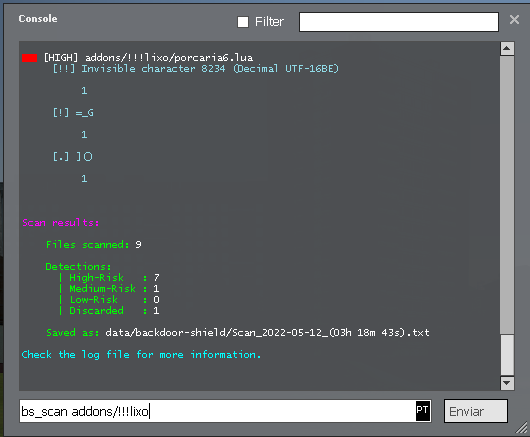 However, there are some inaccessible definition files to control both the real-time detection and the file scanner, completely locked for security reasons. To access them, you need to extract the addon or to use the GitHub version[github.com]:

More info
To see detailed information about the addon, including a list of features, how to install, where are the configurations, how to use, how to read logs and even a simplified demonstration of a backdoor decoding, go to the GitHub page:

Don't worry about your security so much
Despite all the detections I made and demonstrated in the screenshots above, I was running my tests on a list of almost 600 addons downloaded from random internet forums. This type of pirated or obscure content is highly targeted and it's usually very difficult to find them here. People who upload malicious addons to the workshop are heavily attacked by the community as soon as they're discovered, so few have the audacity[github.com].

Anyway
I spent many hours of my free time learning more Lua, researching backdoors and writing code, now it's all realeased for free. I like the idea of "fighting" some malicious code thing that in theory use unusual tactics to trick the game and other developers. Even though backdoors do wrong things, they have a lot insteresting stuff that in and of themselves are not bad at all.

Anyway, this is probably already the "final form" of Backdoor Shield. You know... The target audience is very small and probably made up of pirates. Just buy the addons, folks... Also, I don't like to conflict with DRMs, they use so many tactics in common with backdoors and don't like to see me detouring functions.

Lastly, here are some snippets I deobfuscated[gmbrblog.blogspot.com], if you are interested. But it's all in Portuguese.

Watchful Jun 27 @ 3:01pm
It seems that the realtime protection keeps blocking itself from making an http request?

bob May 29 @ 9:07pm
sorry, it does work. I think it would be best if you clarified that it only works when the server is running, because I was expecting it to work from the main menu. thanks for the mod btw

bob May 22 @ 2:18pm
I've installed this but the bs_scan and bs_scan_full aren't registered

Xalalau  [author] May 11 @ 11:11pm
Update released, it has everything that was missing.

HARD.CODE Aimatt GMod Dead... May 6 @ 3:39am
btw, can you add list of ignore some files or folders even if files have backdoors?

Xalalau  [author] May 5 @ 5:04pm
Hi, sorry for the delay in answering. Unfortunately, the current version (1.8) was left incomplete, so some lists don't fully work. The good news is that now is a good time for me to deliver all the planned features, this addon is too powerful to stay as it is.