Store Page
Unturned>  Workshop > Lin_Ain's Workshop
This item has been removed from the community because it violates Steam Community & Content Guidelines. It is only visible to you. If you believe your item has been removed by mistake, please contact Steam Support.
This item is incompatible with Unturned. Please see the instructions page for reasons why this item might not work within Unturned.
Current visibility: Hidden
This item will only be visible to you, admins, and anyone marked as a creator.
Current visibility: Friends-only
This item will only be visible in searches to you, your friends, and admins. 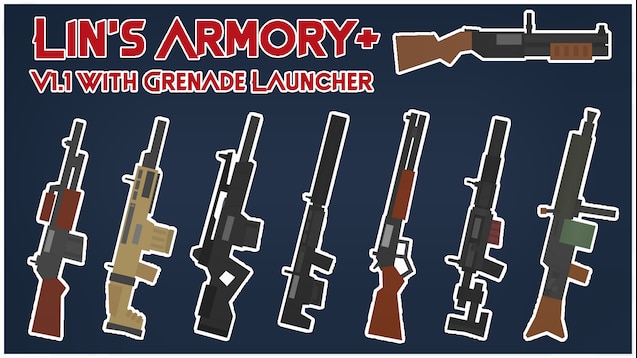 Lin_Ain
Offline
See all 556 collections (some may be hidden)

This item has been added to your Subscriptions. Some games will require you to relaunch them before the item will be downloaded.
Description
*IDs have been listed in the Discussion.
*All the weapons in this mod spawn in Official maps and Workshop maps with official spawntable. Official maps include PEI, Washington, Yukon, Russia and Germany.

About this mod
This mod includes most of weapons from my old mods, with optimization and better balance. It also adds some new weapons. Maybe I will add more items (the rest of weapons from old mods, equipments and some special supplies) in the future.

*Not all the items have been listed in the description.

Tips
*Wooden Grip can only be used on Kalashnikov and Spetsnakov. It is not compatible with Zubeknakov.
*Groza Barrel can only be used on Groza. It can reduce much recoil.
*All the battle rifles use High Caliber Military/Ranger Ammunition.
*BAR, Gianthunter and Maxim use High Caliber Civilian Ammunition.
*Compensators can reduce more recoil than muzzle, though they cannot reduce tracer and flash.
*Navy uses Blackpowder Cartridges to reload.
*Winchester Belt uses Blackpowder Cartridges to refill.
*Military grenade and Ranger grenade can be crafted.
*Chinalake only spawns in Scorpion-7. You can also get it through Horde Beacon.

*Not allowed to re-upload this mod now.
*Leave your comments and give suggestions.
*Hope you can enjoy it!

Plans for next update
Update may come in the mid of November.
Popular Discussions View All (6)

FIREYTHRASH Jan 9 @ 10:56pm
i forgot i downloaded this mod and i thought unturned had a huge update