Store Page
Project Zomboid>  Workshop > rez's Workshop
This item has been removed from the community because it violates Steam Community & Content Guidelines. It is only visible to you. If you believe your item has been removed by mistake, please contact Steam Support.
This item is incompatible with Project Zomboid. Please see the instructions page for reasons why this item might not work within Project Zomboid.
Current visibility: Hidden
This item will only be visible to you, admins, and anyone marked as a creator.
Current visibility: Friends-only
This item will only be visible in searches to you, your friends, and admins. 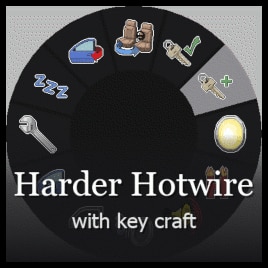 outdead
Offline
See all 368 collections (some may be hidden)

This item has been added to your Subscriptions. Some games will require you to relaunch them before the item will be downloaded.
Description
Description
This mod is mostly useful for multiplayer when cars are enabled.
Current vanilla skill level requirements of 1 Electrical and 2 Mechanics can be gained with perks from the very start, so many newcomers to servers can hotwire and take others' cars without significant effort.
As a bonus the mod has an ability to revert damage done to the cars and even craft a key if your skills are high enough.

Compatibility:
Project Zomboid: 40.43, 41.64.
Other mods: mods that overwrite ISVehicleMenu.showRadialMenu will be incompatible.

New Skill Requirements
Hotwire
Metalworking is now required in addition to upped Electrical and Mechanics levels as a person should be able to at least know his way with metal to open ignition in most cases.

Un-hotwire
Increased requirements. You should not only be able to revert the damage done to electrical circuits, but also put the lock back in place and weld it all together.

Craft Car Key
Overkill? Maybe. But consider that each player now can craft keys if they pass the checks and even become a key dealer on the server - a feature that only administrator could do previously.

Translations
For the time being this mod has full translations to following languages:
If you'd like to translate this mod, send me your translation file and I will add it with credits in-place.

Links and Copyrights
The development is performed on GitHub: https://github.com/openzomboid/harder-hotwire
License: GPL-3.0 (see LICENSE file).
Yes, you no longer can misappropriate the code/idea and add your name to the beginning without repercussions.

HugePinball Apr 28 @ 6:28am
I realize the primary purpose of this mod is the harder hotwiring, but any chance of making the hotwire requirements (and Burglar occupation change) optional or better yet configurable? Or a separate mod that just has the un-hotwiring and key crafting? I really like those two features, but these hotwire reqs are quite steep. Also the server I'm on atm is using Valhalla vehicle ownership so the hotwiring problem is not really an issue.

If you have no interest in this, could I make a fork which does? License and credit preserved of course.

BartHimitsu Apr 20 @ 7:13am
I think/imo this is must have mod for multiplayer server. I will test it how it works and let know. :)

rez  [author] Mar 7 @ 4:43am
@Mr_Tea_Rexx
There's no limit on crafting keys. You can craft a key to the stolen vehicle is you like. After you remove hotwiring of course.

Mr_Tea_Rexx Mar 6 @ 7:14pm
so what happens if a player steals and crafts keys from the stolen vehicle ? or is their a check in place to stop that if a key is already made? and the only way to steal it is hotwire?

Kafkatrap Feb 22 @ 11:45am
I 2nd the combability with Tsar Trailers Mod. (KI5 and Filibuster as well, if it isn't already)

Dr. [HERO] Feb 11 @ 6:21pm
Love the Mod, its very useful for my server.. but it really needs compatibility with the Tsar Trailers Mod, like you warned it overwrites the Radial Menu, is there no work-around? (i don't know nothing about mod making or coding, just enjoy playing them XD) Thanks for your time, have a nice day :D

RIDAI Feb 2 @ 5:47am
TrueMusic actually appends any previous entries via the first 2 code blocks here: https://pastebin.com/mHpNpCWw
But like you say, it probably wouldn't retain their position on the menu..(?)

RIDAI Feb 2 @ 5:34am
Ah I see what you are saying, yeah unfortunately the mods are both overriding thus the problem. Sucks we can't alter the position without replacing the entire function :/

rez  [author] Feb 2 @ 5:19am
@RIDAI
> I would've thought this function would simply append anything added to it to the radial menu

It definitely does. But append works as 'add to the list at the end position', which results is items for unhotwire, craft key and hotwire being in different positions, thus a bad UX. So I don't append, I rewrite the wheel for the looks you see in the screenshots using the order that's more user-friendly.

I know that mod makers usually 'add' elements, but I strive for something a bit more pleasant. That may break compatibility, but if their mods load after mine, they append to the end of my wheel just fine because it's the same piece of code (structurally). The problem arises only if my mod gets loaded after theirs, because it does not know anything.

So I'm in a passive search for something that will allow compatibility preserving order of elements in a wheel, and that's not a big priority.
< >