Store Page
Divinity: Original Sin 2 >  Workshop > frasdoge's Workshop
This item has been removed from the community because it violates Steam Community & Content Guidelines. It is only visible to you. If you believe your item has been removed by mistake, please contact Steam Support.
This item is incompatible with Divinity: Original Sin 2. Please see the instructions page for reasons why this item might not work within Divinity: Original Sin 2.
Current visibility: Hidden
This item will only be visible to you, admins, and anyone marked as a creator.
Current visibility: Friends-only
This item will only be visible in searches to you, your friends, and admins. 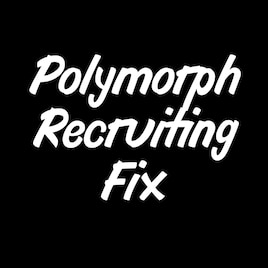 33 items
Description
Fixes a bug with the base game where recruited characters with Polymorph in their class preset (eg. Shadowblade, Metamorph) have fewer attribute points than expected.

However, Polymorph grants 1 attribute point per level. Therefore, you would expect a recruited companion that has a point in Polymorph to come with 4 attribute points in total. This is not the case.

In fact it leads to you permanently having less attributes than otherwise identical characters that added Polymorph after being recruited, or when respeccing that character later on.

This mod rectifies that. Also applies to recruiting characters of higher levels that may come with more than 1 point pre-allocated into Polymorph.

Compatibility
Compatible with all class mods.

Attention
This is not a retroactive fix. It is intended to be installed before you recruit a character with Polymorph in their class preset.