Store Page
Divinity: Original Sin 2>  Workshop > Futeko's Workshop
This item has been removed from the community because it violates Steam Community & Content Guidelines. It is only visible to you. If you believe your item has been removed by mistake, please contact Steam Support.
This item is incompatible with Divinity: Original Sin 2. Please see the instructions page for reasons why this item might not work within Divinity: Original Sin 2.
Current visibility: Hidden
This item will only be visible to you, admins, and anyone marked as a creator.
Current visibility: Friends-only
This item will only be visible in searches to you, your friends, and admins. 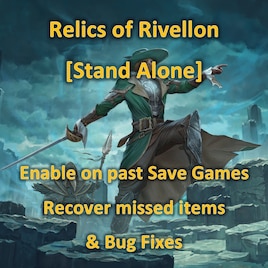 Futeko
Offline
See all 244 collections (some may be hidden)

This item has been added to your Subscriptions. Some games will require you to relaunch them before the item will be downloaded.
Description
Purpose
- Do you have a playthrough started before the release of Gift Bag #5 (Relics of Rivellon) and would still like to see the new content in your game?
- Did you miss part of a Relics of Rivellon quest in your game?
- Does your female lizard look weird when she equips the new Vulture Armour Set?

Then this mod is for you!
The major features of this mod are:

Enables the Relics of Rivellon (Gift Bag #5) content in an existing playthrough
The official Gift Bag #5 is automatically enabled when starting a new game, but is not added to games started before the update. It means that if you're 50 hours into a playthrough, you won't be able to experience the new content unless you start a new game.

This mod brings a solution to this issue by manually adding all the Relics of Rivellon content on any existing game, meaning you'll be able to experience the new content in your current playthrough without restarting the game!

Adds a Quest Restorer that allows you to complete missed steps in Relics quests
Since the quests related to the Relics of Rivellon might start in an earlier Act than your current playthrough (e.g. you are in Reaper's Coast but some mandatory quest steps happened in Fort Joy, which you were not able to complete), you still need a way to complete those missed steps.

This is why the mod automatically detects when you are missing a quest step and gives you access to the "Quest State Restorer" - a friendly Imp summoned by a squeaky ball! They will allow you to simulate a run through the missed steps and restore the quests to state as if you completed their content in the earlier Acts.

Note: this also applies to games with the Gift Bag #5 content enabled!

Fixes a number of bugs within and brings enhancements to the Relics of Rivellon content
New content sometimes means new bugs! This mod brings fixes to a number of those, hopefully contributing to a more stable playthrough!

It also adds a few enhancements to boot!

The full list of bugs & enhancements is found at the end of this description.

IMPORTANT
If you are enabling the mod on a save that does not have access to the Gift Bag #5: do NOT ever, ever, DISABLE this mod on that save. You will irrevocably lose access to the Relics of Rivellon content if you do so, even if you enable the mod again later on!

If you are enabling the mod on a save that does have access to the Gift Bag #5: you're safe! You can disable/enable the mod at your leisure. Theoretically. Hopefully. Maybe don't disable it if you can.

How to use
Simply subscribe here and then enable the mod in the main menu, and the content & bug fixes should be applied to any game you start or load!

If the mod detects that you missed quest steps in an earlier Act, it will automatically give one of your characters a "Quest State Restorer" squeaky ball. Use it to start the process of quest restoration with your friendly Imp!

For instance, let's say your current save is in Reaper's Coast. It means you missed the quest related to the Captain Armour Set because it happens in Fort Joy.
You would then load a save in Fort Joy, complete the quest, and then load your save in Reaper's Coast.
Then, through the Quest State Restorer, you would tell your friendly Imp what you did in that other save, and they will update your Journal and give you the items relevant to your quest (such any Armour Set pieces you might have found).

Going through the restoration process might not create the exact same Journal entries as in your other saved game, but they should hopefully remain pretty close!

Note: once you've been through the full restoration process, the friendly Imp will bid you goodbye and disappear along with their squeaky toy - let's not clutter your inventory, shall we?

Captain Armour Set
Restoring the acquisition of each piece of the Captain Armour Set after leaving Fort Joy as the quest happens solely there. This can happen only if the set has not been completed in the current playthrough, obviously!

If past Fort Joy:
If past Reaper's Coast:

Contamination Armour Set
Restoring the actions and decisions taken in Fort Joy and Reaper's Coast, if any.

If past Fort Joy:
If Reaper's Coast:

Devourer Armour Set
Restoring the acquisition of any missed armour piece. The restored armour piece will scatter around the character using the Quest State Restorer. The "Place of Longing" dialog will automatically trigger immediately after the "Pickup" dialog has ended.

If past Fort Joy:
If past Reaper's Coast:
If past the Nameless Isle:

List of bugs/enhancements
The full list can be found in this spreadsheet (it contains spoilers so beware): https://docs.google.com/spreadsheets/d/1hphMUOLVy9zLg4s_KUQVdeViUlfYPm2iXiTjI6Fr-v8/edit?usp=sharing

Sample bug fixes:
- The Vulture Leggings on a female Lizard cause a bug with their tail. The model has been replaced with a similar, working model while waiting for an official fix.
- When the full Vulture set is equipped, anyone losing a "Chicken" or "Spider Legs" status will gain the Vulture Wings buff, even if they aren't the one with the full set equipped. This mod fixes that.

Quest restored, item not given?
Pauline

undeadbydawn May 6 @ 5:55am
Note to new users:
You have to activate the mod then confirm the activation , or it won't load.
Also, the complete armour sets all spawn in your inventory except Devourer, which spawns on the ground around you.
Spawning Devourer items can break the quest. You can get around this by soul-eating the Dreamer.

Callum Apr 20 @ 1:11am
i have the mod installed, and wanted to recover the contamination set in act 1 but one of my party member who had the "Quest State Restorer" squeaky ball said she sold/left it at act 1 but i'm already in act 2 and dont have the squeaky ball anymore. How do i fix this or did my friend fked up. X_X

Andromeda Dec 3, 2021 @ 12:42am
This mod does not work for me. I originally got it because I was missing the Devourer's claws. Got them with the mod, did the quest part on the nameless isle and went to Arx.

However when I did the final part of Seed of Power, the enemies spawned before I entered the room, and the helm of contamination did not spawn. Upon deactivating the mod, the Seed of Power quest was fixed, but the Devourer's Gloves vanished.

The helmet of the devourer fails to spawn without the mod active, but the quest restorer does not let me retrieve the previously vanished gloves

Rhettorical Nov 18, 2021 @ 11:37pm
It's possible to screw up the Contamination armor and I don't think this mod accounts for that. The issue is that the Gloves have to be created via Trigger Spores while being held by a living person or corpse. Daeyena does this if she's alive, but if you do it and screw it up, you're out of luck.

This mod doesn't account for that. There are no Spores that I'm aware of in Act IV, as the Helm is premade when you get there. So if you've blown up the Spore in Act II and don't have the Gloves, you're SOL.

I'm trying to find a mod that lets me spawn in any item I want and I was hoping this would allow for that.

Canadia Boy Nov 5, 2021 @ 12:53pm
@Tharnic, I've noticed this too as the game creates duplicates of the sets. So whenever I load a save, the devourer's chestpiece and helmet go back to where I found them. Sad thing is the originals I got didn't level up and are stuck at 18 while the other's are at 19 :/

Tharnic Oct 15, 2021 @ 5:45pm
it does still appear in the mod list. But it is not running smoothly. Every time the game starts a message pops up that says a new quest restorer is added to my game, but it never is.
If you deactvate the mod (gift pack activated from the start) items from the questlines will go missing! (for me, the devourer gloves went missing).
Warning: if you actiavte the mod, do NOT deactivate it! Set-items will disappear from your inventory!