Store Page
Arma 3>  Workshop > Petrovic K.'s Workshop
This item has been removed from the community because it violates Steam Community & Content Guidelines. It is only visible to you. If you believe your item has been removed by mistake, please contact Steam Support.
This item is incompatible with Arma 3. Please see the instructions page for reasons why this item might not work within Arma 3.
Current visibility: Hidden
This item will only be visible to you, admins, and anyone marked as a creator.
Current visibility: Friends-only
This item will only be visible in searches to you, your friends, and admins. 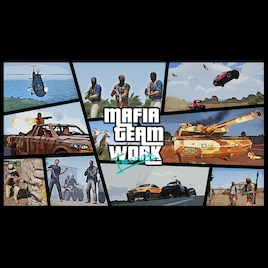 cheif22
Offline
See all 10 collections (some may be hidden)

This item has been added to your Subscriptions. Some games will require you to relaunch them before the item will be downloaded.
Description
Mafia Team Work Freemode is a fast paced and dynamic gamemode inspired by GTA IV Team Mafia Work with common objectives for 8 families in PvPvE (also playable in single player or coop) and features a real civilian and cop life.

In Mafia Team Work, your family and yourself are working for Kenny Petrovic, in direct confrontation with other families. Your objective is to earn more respect and prove to Petrovic that your family is the only one to trust.

Petrovic gives your mission objectives, common to all families, by cell phone. Each objective completed adds respect points for you and your family, as well as money you can use to call an ambulance or rearm by calling Little Jacob. When game time is over, the game ends once the current mission is completed. The team that got the highest Respect score will gain the trust of Mr. Petrovic, Godfather of Altis.

“Will you be able to work like the mafia to face other families, between local gangs and law enforcement ?”


The Wanted Level is inspired from “Grand Thef Auto”, and tells players how much police attention they are getting, or in a few missions, how much they are actively searching for the objective.

Wanted Level stars are related to your own actions, only the wanted mafia member sees it, and cops will only be after him. Altis police don't get tired, other mobsters are not safe: if a patrol sees a mafia member, they can decide to engage him as well.

On mission, stars however are global. All mafia members will be actively wanted by Law Enforcers. Expect cops, FBI agents, and Army to come in number, protecting objectives assets against the mob.

Level 1 :
Depends on checks and stops (usually on foot) or patrol that randomly happen on the map. If the patrol has not been neutralized or outrun, it will call reinforcement and therefore Level 2.

If you meet a police patrol, which is not already chasing someone, they will chase you if you have at least one star.


Level 2 :
From 4 police units chasing you, 2 stars will be displayed at your wanted level. If you don't neutralize them or outrun them fast enough, they will call a helicopter with S.W.A.T. crew, which will trigger Level 3.

The various events impacting Wanted levels overlap each other. As a result, shooting down or outrun a patrol does not reset your Wanted index if another patrol is also on your trail.

NB: From Level 2, reinforcements are called continuously every X times. Only outrun or kill all the police currently chasing you, can lose your Wanted Level.


Level 3 :
Level 3 is there as long as you have a police helicopter chasing you.


Level 4 :
If the police have too much trouble arresting you, FBI vans will be called in for reinforcement and S.W.A.T. will have better weapons.


Level 5 :
Are you still alive? The army will therefore try to teach you who dominates this island.

The amount of active reinforcements simultaneously depends on the mission and the number of players connected (also configurable). Backups, as well as regular patrols will head towards the objective to protect it from the mafia.
Wanted Level progression is based on the number of patrols neutralized.

Thanks to SilverHaze5x for teaching me the basics of SQF programming.
Thanks to LEDA for the two great video clips, Teaser & Trailer.
Thanks to beta testers for their investment and their patience:
LEDA, SPC Cheif22, a bush, a stone, Farside, as well as those who participated in the first version, "Katalaki Bay".

Thanks to the following people for their scripts as well as to all of those in the BIS forum who help all moders in Arma enormously:

PINNED: How to start a Single Player game ?
Petrovic K.

PINNED: You don't like this mission, tell me why!
Petrovic K.
< >
29 Comments

LeonardoETC Sep 19, 2020 @ 7:03pm
It would be epic if you did another mission like Tanoa Free Mode but with the wanted level as in this mission :)

gheoss Jul 6, 2020 @ 11:39am
Hello im setting up a dedi server for my community with this mod, and we are getting this error ...no entry ´ bin/config,bin/CfgWorlds.Altis´

Sir. Vapenation Jun 29, 2020 @ 11:30am
@petrovic
Ace 3 is heavily imcompatible with this mod. Getting into combat with PD crashes game.