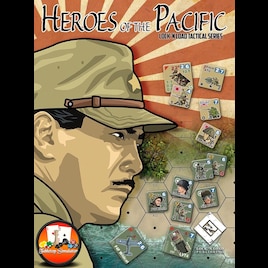 69 items
Description
Game Description:
Heroes of the Pacific brings the award-winning Lock ’n Load Tactical game system to the Pacific theater with a vengeance. Heroes of the Pacific details America’s brawl with Japan during World War 2 and includes twelve frantic firefights from America’s audacious island-hopping campaign. You will lead desperate Marines struggling ashore on Tarawa, face a counterattack of HA GO tanks at the Peleliu airfield, fight for Kitano Point on Iwo Jima, and more.

It isn’t, however, all about the Marines; Heroes of the Pacific comes chock full of the U.S. Army’s finest, as well as the Imperial Japanese Army, all drawn with the painstaking detail our fans have come to expect. With 12 exciting scenarios in the full game to test your combat skills. It’s squad-level combat at its most exciting; Lock ’n Load Tactical.

The older 5.0 rules and 5.0 PACs have been saved in a separate folder inside the Admin Counters Crate on the table.

Notes:
If you like this mod then please remember to rate it or even add it to you favourite list. This kind of support will go a long way towards providing additional mods in the near future.

Enjoy and please comment if you have any questions or concerns regarding the mod.

Richthofen56  [author] Sep 26, 2020 @ 5:00am
Most welcome William and glad to help. TTS can be a bit of an uphill climb when you first start out. Once you have all the KB shortcuts in your tool bag, it gets a lot easier to navigate. Enjoy and thanks for the kudos.

Cheeks Sep 25, 2020 @ 3:01pm
Thanks Rich, fast reply 😄. It never occurred to me to scale ( embarrassing because I’m an engineer). Anyways I know what to do and I’ve sent a friend request.

Also, wonderful work. You have my admiration.

Richthofen56  [author] Sep 24, 2020 @ 5:06pm
You may also want to rearrange stuff on the table to make more room by moving it to the sleeves (the table has 6 side sleeves which are activated with a red button near the sleeves knob). If something wont move its probably locked. Just hover over it and hit L to unlock it so it can be moved. Be sure to re-lock the dice trays as those don't work unlocked. If you need more info just send me a friend request and we can chat or go on voice to discuss.

Richthofen56  [author] Sep 24, 2020 @ 4:55pm
Hey William. Not the table no, but you can scale the maps down to size by right clicking on them and choosing scale down. Either do them all at once by group selecting them or count the clicks you use to make sure they all stay the same relative size. You may also want to do the counters the same way with the same number of clicks. Once its all done, save a copy of this setup so you don't have to do it again. Hope that helps.

I'm kind if new to TTS. The table area is not big enough to have 2 row and 2 columns of maps (4-maps total). Is this something I can do to enlarge the table surface area?