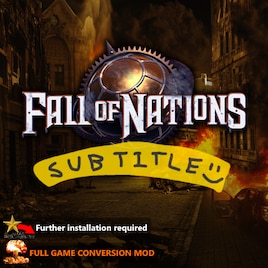 This mod is no longer being regularly developed
Due to limited development resources, development time for this mod was reallocated into making the Community Balance/Bugfix Patch as good as possible (which succeeded). As such, Fall of Nations is unlikely to ever reach its intended playable state, but large amounts of what was learnt while developing FoN was utilised in bugfixes and enhancements for CBP.

Due to a bug / unforeseen consequence in how RoN's mod manager is coded[mhloppy.com], I've had to repackage the way this mod is distributed. In order to activate the mod after downloading it, you'll need follow the steps below.

Scope and Purpose:
The mod's primary purpose is to be a tech demo for you and a learning experience for me. While I'll certainly try to make the end result enjoyable to play, the mod's primary purpose is to show off what can be done in RoN via mods, not necessarily to maximise gameplay enjoyment. It'd be cool to see other modders inspired by or even building off of some of what I demonstrate.

The mod's implementation will be focusing on a single player campaign experience. See here[mhloppy.com] for more information and a full breakdown of expected features. The mod is currently ~7% complete as of the 28th of September.

How to use:
1) Subscribe to the mod. (this step will not automatically load the mod in any capacity that is either useful or damaging)
2a) Locate the downloaded Workshop files. For a default Steam install this will be:
C:\Program Files (x86)\Steam\steamapps\workshop\content\287450\2095973641\
2b) Copy the Fall of Nations folder into your Rise of Nations\mods folder. For a default Steam install this will be:
C:\Program Files (x86)\Steam\steamapps\common\Rise of Nations\mods\
2c) OPTIONAL: From these files, you will further need to go into the Manual Install folder within the mod, and copy the folders located within into your base Rise of Nations folder. You will get a notification that doing so will overwrite some files. This is okay, and I have provided backup files to restore back to if you want them (or you can get the original files from Steam by verifying your game files should you need to).
3a) If you start Rise of Nations, you should now see custom graphics in the launcher if you followed step 2c above.
3b) Ensure that the mod registers as loaded and enabled in the Rise of Nations mod manager (accessible via Tools & Extras -> Steam Workshop). To make use of updates to the mod, you'll need to manually repeat step 2 to activate the changes downloaded by Steam.
4a) If you ever want to disable the mod, DELETE THE COPIED FILES (keep the original ones that Steam downloaded). If you disable the mod without deleting these extra files, game assets will incorrectly load due to a limitation of the game's mod manager and it can cause audio glitches, missing graphics, broken menus, and game instability.
4b) Remember that you will need to restore the original launcher graphics as well. Copies of the original files are included in the Original File Backups folder.
4c) To restore the mod after previously deleting it, simply repeat step 2) again.

Step 4 may involve backing up campaign progress in the future once the mod includes one.

Compatibility:
Since Fall of Nations is a full game conversion mod, assume by default that all other Rise of Nations mods will be incompatible with it unless you know otherwise. While there may be a small number of mods that would be compatible, I can't manually verify every other mod. Instead I'll provide a whitelist of my own compatible mods once FoN is more developed.

CC0 images that I did some editing on for the menu backgrounds:
Popular Discussions View All (2)

MHLoppy  [author] Jul 30, 2020 @ 9:45pm
@Fedomar you have entirely misunderstood what this is, and evidently haven't read the description.

MHLoppy  [author] Jul 27, 2020 @ 8:05pm
@BlackFalcon no worries! I know it can be frustrating to find old projects abandoned. I'll try to get in touch with you if I ever tackle WiC (but otherwise my friends list is already too full for my liking D:).

BlackFalcon366 Jul 27, 2020 @ 5:15pm
That'd cool bro...sorry if I came off to judgmental. I should be happy anybody is interested in improving this game in any way. If you do decide to fix WIC I already have all the data mapped out and could help with testing and promotion as I am a streamer. It's just that WIC did such an amazing job and had so much potental that I hate seeing it still unfinished yrs later. Good luck with whatever you decide.

MHLoppy  [author] Jul 27, 2020 @ 1:02am
As one final thing, if I magically pull time out of my ass in the future (we're talking 2021+), if this mod is well-received I can make it into a series of campaign releases instead of a standalone once-off (I've already mapped out loose themes for what such a campaign series could be like). Those might more tickle your fancy since I'll have gotten most of the tech-demo stuff out of the way by then, but yeah I'm just not that interested in the full gameplay conversion mods, sorry

MHLoppy  [author] Jul 27, 2020 @ 12:57am
If I end up looking at WiC as a reference and I believe the work to fix it isn't unviably high I may try to fix it up (such as I've done with the CtW Rare Resources mod), but at the moment it's not one of the mods I've been referencing. As I get closer to gameplay implementation I might take a look at it though, as a couple of its features do sound interesting.

I feel like using the "full game conversion" terminology may be confusing to some people. I'm using it to communicate the fact that if you load this mod, Rise of Nations breaks - it is no longer playable and is instead replaced by Fall of Nations. Since I'm including menu mods, you may not even be able to access "RoN" at all while playing FoN. This is to contrast it against mods that you can just load in and out easily from the mod manager etc, as I want it to be very clear that you lose access to RoN to use this mod.

MHLoppy  [author] Jul 27, 2020 @ 12:51am
@BlackFalcon it's intended to be a playable tech demo mod (per description). The features aren't intended to maximise gameplay potential, but to maximise demoing modding elements which I believe are being underutilised. I think making use of these underutilised things is cool, and I hope other people will think so too.

I'm still aiming to make the end product enjoyable, but this is closer to HL:LC (sans built-in commentary) than HL2. On a personal level I'm not that interested in the total conversion mods which focus on overhauling gameplay such as WiC, so fixing up most of the old mods like that would unfortunately just be basically unpaid work for me. As a player I think RoN's core gameplay is already very solid, and believe most major gameplay changes actually make the overall game state less so. As a modder I've looked at a few of these big gameplay-focused mods and found them *mostly* uninteresting in technical scope. That's not to say they're bad mods, they're just not for me.

BlackFalcon366 Jul 26, 2020 @ 11:31pm
So I'm just now seeing this...looks decent but I'm unable to tell exactly what the end goal is. It kinda seems like the focus is on all the features that nobody really cares about....I don't need a re-skin of units, menu or minor tweaks....what we need is someone to take on the goal of the World In Conflict Beta mod and go from there. What I need is extra mechanics, a few realistic units added and maybe a general graphics update. I would gladly donate and support if I could fine such a project. I've been working for months on fixing and updating the World In Conflicts Mod but I'm not a modder so I woud'nt trust myself to do it for other people.

MHLoppy  [author] Jul 22, 2020 @ 1:59am
@Abraham Lincoln the location for the workshop files will depend on both your OS and your Steam install / steam files locations. The file path I've specified is the most common by far, but unfortunately won't cover everyone's file path (not even my own!).

If you believe it's been downloaded but are unsure where, you could try using the search function of your OS to look for "Fall of Nations" (which might be a slow process), or a 3rd party search such as Everything (usually faster) https://www.voidtools.com/ to do the same.

Sd.Kfz 165 Hummel Jul 21, 2020 @ 2:46pm
Well what happened is I subbed to the mod, ran RON, then realized I needed to manually do it (cause I was lazy and didn't read) and so I looked into the files area where you specefied, and even do some extra looking around, should it be under a different name. No luck.
< >