Store Page
Conan Exiles>  Workshop > TModano [GN]'s Workshop
This item has been removed from the community because it violates Steam Community & Content Guidelines. It is only visible to you. If you believe your item has been removed by mistake, please contact Steam Support.
This item is incompatible with Conan Exiles. Please see the instructions page for reasons why this item might not work within Conan Exiles.
Current visibility: Hidden
This item will only be visible to you, admins, and anyone marked as a creator.
Current visibility: Friends-only
This item will only be visible in searches to you, your friends, and admins. 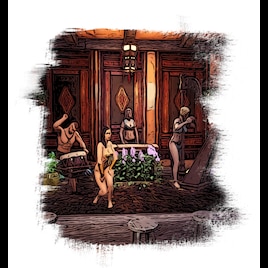 TModano [GN]
Online
See all 121 collections (some may be hidden)

This item has been added to your Subscriptions. Some games will require you to relaunch them before the item will be downloaded.
Description
MOD ID: 2036719585 (player_dancer.pak)
Version 1.2.0

Ever get tired of having to rely on a thrall entertainer? Ever think a players dance should be just as good, if not better, than a thrall entertainers?
Ever want to use a bandage on your friend instead of dropping it on the ground for them to pick up and use themselves?

Well be at ease, for that has changed! Welcome to a world where player dances provide the same effects as thrall entertainers, and players can apply bandages to other players, plus more!
DISCLAIMER: The buffs do not affect the player dancing.

Players ability to apply bandages to OTHER PLAYERS via the radial menu. That's right, hold [E] on another player, and if there is a bandage in your hotbar, you will get a bandage option to apply a bandage!
(You can also bandage thralls/pets now)

brybryperry Nov 11 @ 1:59pm
Can this mod just be used for the player bandaging? And do you have a discord

Atrious Nov 11 @ 1:32pm
I can try turning that option off then back on again.

TModano [GN]  [author] Nov 11 @ 3:56am
Were you trying on yourself, as in you dancing and trying to heal yourself? Cause there is a dancer can buff self option needs turned on.
Also, this shouldn't matter where it is in the load order, it doesnt mess with any funcom BP directly.

Atrious Nov 10 @ 10:22pm
Is there a specific mod order that this should be in or mods that may be incompatible?
Finallry got it working (learing all the emotes at the same time as these recipes causes a CTD)

After getting it to work, it appears that health regen and corruption removal don't work.
Not sure what's going on there.

Atrious Nov 8 @ 10:56am
Menu is under shift L
Bugs to report:
Doesn't appear to assign to loot table when box is check, even at default drop rate of 100%
Spawned in scrolls (Apparently missing in world) and learned dance and emotes and scrolls. Tried to use one of the dances and encountered a fatal error crash to desktop.

TModano [GN]  [author] Nov 8 @ 4:22am
Yea I was thinking about that actually. I'll certainly look into it. For now, it should be shift-p fpr my admin menu.

Atrious Nov 8 @ 12:02am
Just as I was looking to find the command to access the command menu
Any chance of incorporating it into the mod control panel mod?