Store Page
Divinity: Original Sin 2>  Workshop > TrshyMcTrashface's Workshop
This item has been removed from the community because it violates Steam Community & Content Guidelines. It is only visible to you. If you believe your item has been removed by mistake, please contact Steam Support.
This item is incompatible with Divinity: Original Sin 2. Please see the instructions page for reasons why this item might not work within Divinity: Original Sin 2.
Current visibility: Hidden
This item will only be visible to you, admins, and anyone marked as a creator.
Current visibility: Friends-only
This item will only be visible in searches to you, your friends, and admins. 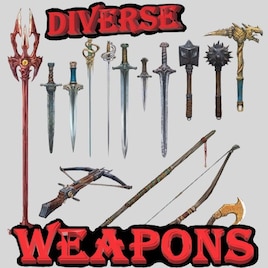 TrshyMcTrashface
Offline
See all 678 collections (some may be hidden)

This item has been added to your Subscriptions. Some games will require you to relaunch them before the item will be downloaded.
Description
Weapons
I found the decision on what weapon to use pretty boring most of the time. It was almost always merely based on total damage with infrequent consideration to other factors. This mod simply aims to diversify the weapon bases a bit, making changes to damage type, base damage, crit chance/damage, cleave percent/angle, as well as adding small status effect chances to all weapon bases. I tried to make them as balanced as possible while also making each base feel like it has it's own "unique" feel and keep them, what I believe to be, thematic to the base type.

Disclaimer: while I tried to balance the stats among themselves, these changes are likely at least small buffs. If you think it makes the game too easy, I would recommend utilizing other mods that increase the game's difficulty. I play with A LOT of mods on, most of them making the game more difficult, as well as on honour mode, so I don't know how this feels for vanilla. Also, remember: enemy weapons will get these changes too.

These will affect the base of all vanilla weapons, so magic+ weapons will build on top of these. If another mod creates a new weapon base, this mod shouldn't affect those.

Runes
I also found runes to be rather boring, so I added small chances to inflict thematic status effects based on the rune base, with the severity and chance of inflicting each status growing alongside the rune size. I did not make any changes to the weapon % buffs or touch the armor or amulet buffs.

Source Orb
I wasn't a fan of the skills provided by the Source Orb and pretty much only utilized Mass Cleanse Wounds. So, I changed the amulet buff to provide Apotheosis and the weapon buff to provide Vampiric Hunger Aura. Now, I actually use them...

You can find the changes here:
DIverse Weapons[docs.google.com]

Vexien Jun 14, 2021 @ 8:02pm
@Deejerz yeah I feel like you could of added diversity by adding pierce to the bow, as crossbow is used by almost everyone in the game, it has much higher damage almost always (i see it hit less hard than the bow maybe one in 10 shots) and all npc's (maybe 80%) use crossbows, so everyone including you now pierces with the higher damage weapon. It's like making a twohand pierce instead of daggers. Like I get it, you think crossbow hits harder so pierce but if that was the case daggers wouldn't pierce as they hit way less hard than any other weapon. They find holes in armour and you could say an accurate archer does the same with arrows. Plus it would make people use bows that have 20-40% less damage on average than crossbows of the same level. Plus -1 movement is laughable as ranged attackers rarely need to move, and if they do its a teleport. so haste on the bow doesnt matter for the same reason. The combat areas arent big enough for ranged to need to move a lot.

TrshyMcTrashface  [author] Mar 4, 2021 @ 5:32pm
@Vexien I wouldn't say the Crossbow is outright better than the Bow. While the Crossbow has a higher base damage, it also has a wider damage range (30 for the Crossbow vs. 10 for the Bow). This means that the damage can be much variable and is more of a high-risk, high-reward weapon. You can do more consistent damage with a Bow. The Bow has a 15% base Critical Strike chance and the Crossbow has 0%. Because the base crit damage is 150%, this acts as a 7.5% more damage boost over the long run. Additionally, you have a 20% chance to grant yourself Hasted with Bows allowing you to take more actions on the next turn. The Crossbow also comes with a -1 movement penalty inherently, but also has a chance to knock the opponent down - again high risk, high reward. I changed the crossbow to piercing damage as a way to make up for the consistency and chance to grant Hasted by the Bow. Mostly though, the decision was made largely for diversity's sake, which of course was the main goal of this mod.

TrshyMcTrashface  [author] Mar 4, 2021 @ 5:12pm
Absolute Scoundrel ability damage should not be gimped as it based on weapon damage, whether it be physical or piercing or elemental (there are other mods for this), and therefore should scale accordingly. It sounds like the issue everyone is having with the piercing damage is that it can't remove physical armor which is preventing them from inflicting statuses. I created the mod while using Divinity Unleashed, which changes the armor system so that physical and magic armor are flat damage reduction instead of a separate "life bars" that must be depleted (this actually makes piercing a WAY more powerful mechanic as it bypasses the damage reduction completely). Divinity Unleashed also makes it so that status effects are not prevented by physical and magic armor. Now, I realize that not everyone uses Divinity Unleashed and that might make my mod less attractive since it is based on those mechanics, and that's alright.

TrshyMcTrashface  [author] Mar 4, 2021 @ 5:11pm
@GaelicGamer and TheOnlyKaz Unfortunately I had to reformat my HDD a while ago and I lost all of the original mod files. Therefore I am unable to make any updates to the mod without completely recreating it. You could download the Divinity Engine and make a made that just changes daggers. Input the values from my spreadsheet but keep the damage type as Physical and then be sure to place it below mine in the mod order so it overwrites. There are lots of guides online to using the Divinity Engine.

TheOnlyKaz Oct 11, 2020 @ 9:25am
has the piercing been addressed for scoundrel? I dont want to gimp rogue players by utilizing the addon if their ability damage suffers from using daggers.

LordLioath Aug 5, 2020 @ 8:36pm
Love the mod, but I agree with Drakka, the piercing on Daggers makes them hurt the scoundrel abilities that require daggers more than it helps, would be better as a physical damage weapon.

Thank you for the feedback everyone. Apologies for taking so long to get to it. Please let me know what you think of the changes.
< >