Store Page
Divinity: Original Sin 2>  Workshop > Hunter-Ghost-27's Workshop
This item has been removed from the community because it violates Steam Community & Content Guidelines. It is only visible to you. If you believe your item has been removed by mistake, please contact Steam Support.
This item is incompatible with Divinity: Original Sin 2. Please see the instructions page for reasons why this item might not work within Divinity: Original Sin 2.
Current visibility: Hidden
This item will only be visible to you, admins, and anyone marked as a creator.
Current visibility: Friends-only
This item will only be visible in searches to you, your friends, and admins. 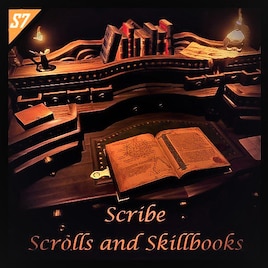 This item has been added to your Subscriptions. Some games will require you to relaunch them before the item will be downloaded.
In 1 collection by Hunter-Ghost-27
Hunter-Ghost-27's Mod Compendium

5 items
Description
The mod lets you scribe copies of scrolls and skill-books in your inventory without having to re-craft them from scratch. If you hate waiting hours for traders to restock to find the right ingredients for your favourite scrolls; or maybe you just love roleplaying a scroll-mage that wants to mass-produce and build a monopoly by selling chicken-claw scrolls. If so, then this mod is for you.

⚠ IMPORTANT ⚠
The mod has been recently updated (/rewritten) to use the script-extender. This enables the mod to dynamically generate scribing recipes for vanilla and modded scrolls-&-skillbooks. Unfortunately there was no easy way to maintain compatibility with existing saves. As such using the updated version can cause issues for existing playthroughs. If the update causes issues, you can enable the legacyCompatibilityMode in Osiris Data/S7Central.json. You only need to do this if you wish to continue a playthrough you started with this mod's previous version and are experiencing problems. Any new-games should have it turned off. I apologize for the inconvinence caused. The mod might work as in legacyMode if you don't have the script-extender.

About the Mod
Features
The mod allows you to use Inkpots-&-Quills to copy any skill-book on a blank skill-book of the corresponding type and tier. So you can preserve the knowledge and share it among your party members before you inevitably devour it. or you could just sell the copies for profits.

Adds a generic BlankSkillbook for Warfare, Huntsman and Rogue skills. ( While making this mod I realized that there were no Blank Skillbooks for them, so I had to make a new one. This book also works for higher-tier skills.)

To copy scrolls you also need the corresponding Elemental-Essence (Air Essence, Shadow Essence, Tormented Soul etc.) in addition to the Original Scroll, Inkpots-and-Quills and a Sheet of paper. This puts some limitation on how many scrolls you can scribe, without having to pray to RNGesus for the crafting ingredients. Essences are a finite but readily available resource.

Note: You don't need chicken-claws, nails or large-antlers etc. to scribe a scroll, like you would for crafting them, you just need the Essence. Source Skills require Source-Orbs instead of Essences. Scribing a scroll or skill-book will not consume the original, this mod wouldn't be much of an upgrade otherwise.

Highly-Anticipated-Questions (HAQs)
* Q: Does this work with modded skill books and scrolls?
* A: I'm sorry, No. The mod just contains recipes for base-game skills and scrolls because I had to create the recipes for each scroll and skill by hand. This was pretty much my first mod and I don't know of a better way to make crafting recipes. So you can't scribe modded skill books and scrolls unless I or someone else makes these crafting recipes for them. I might be willing to do it if I find the time and motivation; and the permission of the respective mod-authors.
* YES! Thanks to amazing script-extender the mod can now dynamically generate scribing recipes for modded scrolls and skillbooks. T&C apply.

Hunter-Ghost-27  [author] Jan 20, 2021 @ 11:48am
While both the Crafting Overhaul and Epic Encounters make significant changes, incompatibility from a technical stand-point is unlikely; unless they change how the DOS2's crafting systems work fundamentally. The way crafting works under the hood is that each recipe has a unique identifier. Two recipes with different identifiers are, for all intents and purposes, separate entities. Regardless of what the results or constituting ingredients are.
Any design incompatibility can be handled on a case-to-case basis, but for the most part, they won't be an issue either. All-in-all, I'd say you're good to go compatibility wise (CO or EE2).

I do appreciate the feedback! and It's a good idea to wait till you finish your current playthrough. I'll recommend making hard-saves at the start/end of each act. You can use them to test mods before your next proper playthrough.

Khronn Jan 20, 2021 @ 7:15am
In terms of overhauls, there is a massive mod called Epic Encounters in the works. It’s in beta but anyone can join their Discord to get the download (I personally like to wait until things are ‘done’). It will probably have just drastic changes on every part of the game that most mods will need patches or separate versions for compatibility. Support for if/when EE officially release would be wonderful. :)

Khronn Jan 20, 2021 @ 7:14am
I don't know if you were anticipating my feedback but I figured I should let you know that I won't be using any mods that add new content until I have completed tactical mode at least once (I think your mod is balanced but having these options at all could be considered an advantage) so I won’t be able to test compatibility anytime soon. Instead, I found a guide that lists CO recipes and ingredients encase they may be useful to you:
https://steamcommunity.com/sharedfiles/filedetails/?id=1517583201

In the end, Crafting Overhaul is a massive mod that has a lot over overreach but the mod hasn’t been updated since 2019. It seems the author hasn’t been very active in answering questions and some users are reporting glitchy or nonworking recipes and items. I think it’d be fair to state that support/compatibility can’t be ensured until some clarification or update on CO’s part.

Hunter-Ghost-27  [author] Jan 16, 2021 @ 1:48am
I've never used Crafting Overhaul so I can't say for sure, but there shouldn't be any problems. In fact, there probably won't be any overrides either, as that would require both mods to affect the same entry. At worst, you'd have two different crafting recipes with the same ingredients giving you the results of both.
Make a hard-save. Try it out, and let me know if you run into any issues.

Hunter-Ghost-27  [author] Apr 13, 2020 @ 1:16am
@Complete Casual
You're quite welcome.
I can't blame you for ignoring scrolls, most RPGs never give you a reason to use finite consumables over your skills. That said, DOS2 has ways (like ambidextrous and five-star-diner ) that makes consumables interesting, but you have to adapt your builds (and mindset) to make the most out of them. It's possible to make builds that completely rely on scrolls even without this mod, but keeping track of all the ingredients (and praying that you actually find them) is kinda tedious. Which is why I made this.

P.S. - There is nothing like spamming 6+ Epidemics of Fire on a boss (that is 3 levels above you) in a single turn without using any source-points, I'll tell you that. Broken stuff aside, having access to utility-skills like haste, fortify or teleport scrolls is good on any build, and traders pretty much always stock them. Even if you don't plan on using ambidextrous, these scrolls provide immense utility.

Complete Casual Apr 12, 2020 @ 8:38pm
I literally ignored scrolls for many a play through, I might try to use them more with this mod. Thanks for an interesting mod :)

greedisgood666 Mar 12, 2020 @ 12:05am
The idea, the reason behind it, so simple yet so complicated. All that meticulous divine-like system just to unleash the exact opposite. This is ART, my friend. Thank you!
< >