Store Page
Divinity: Original Sin 2>  Workshop > RobotGodzilla's Workshop
This item has been removed from the community because it violates Steam Community & Content Guidelines. It is only visible to you. If you believe your item has been removed by mistake, please contact Steam Support.
This item is incompatible with Divinity: Original Sin 2. Please see the instructions page for reasons why this item might not work within Divinity: Original Sin 2.
Current visibility: Hidden
This item will only be visible to you, admins, and anyone marked as a creator.
Current visibility: Friends-only
This item will only be visible in searches to you, your friends, and admins. 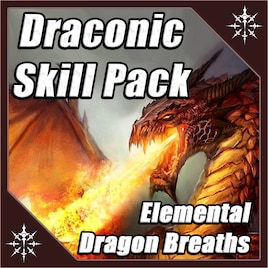 This item has been added to your Subscriptions. Some games will require you to relaunch them before the item will be downloaded.
In 1 collection by RobotGodzilla
RobotGodzilla's Workshop Collection

20 items
Description
Draconic Skill Pack
This mod adds several types of elemental dragon breaths at your disposal. You can buy them from Mysterious Wanderer who is located at four different locations.

RobotGodzilla  [author] Feb 22 @ 8:21am
@LoveMaker
Graphical effects can be made in the effect editor that you later save in the resource manager. After doing that you can add your custom effect into the skill effect.

LoveMaker Feb 22 @ 2:57am
Hey RobotGodzilla, do you know where I can learn to create or change graphical effects for skills in this game? I've figured out how to create skills but I'm having trouble finding information on graphical effects.

EngelloFox Nov 16, 2021 @ 7:36am
I'm sorry, but maybe I don't know something. But earlier I saw a book in the inventory at the start of the game with a choice of the type of dragon's breath, but now it is not there and there are only merchants who sell books with skills for extortionate price tags.

EngelloFox Nov 12, 2021 @ 7:20am
Good afternoon. And please tell me, your modification of the "Draconic Skill Pack" for "Divinity original sin 2" has stopped working. It is simply not in the game, although the modification is enabled and previously worked correctly.

RobotGodzilla  [author] Mar 31, 2020 @ 11:32am
@William Z What causes fire damage? There is a recipe list in the description that tells you how to craft these skills.