Store Page
Divinity: Original Sin 2>  Workshop > Straelbora's Workshop
This item has been removed from the community because it violates Steam Community & Content Guidelines. It is only visible to you. If you believe your item has been removed by mistake, please contact Steam Support.
This item is incompatible with Divinity: Original Sin 2. Please see the instructions page for reasons why this item might not work within Divinity: Original Sin 2.
Current visibility: Hidden
This item will only be visible to you, admins, and anyone marked as a creator.
Current visibility: Friends-only
This item will only be visible in searches to you, your friends, and admins. 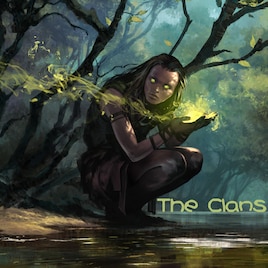 Straelbora
Offline
See all 488 collections (some may be hidden)

This mod introduces 3 clans namely Rodent, Hawk and Shark. They are intrinsically 3 new classes, totally 36 new skills with all new customized visual effects are made which is 12 for each clan. Moreover, 33 new statuses and 3 Clan Bosses are added.
汉化版
用中文玩新的征程或以前的存档请点击这里进入汉化版。

Update
❕The previous bug of Hawk Clan's Reset with Divinity Unleashed Mod on has been fixed. If you are using these two mods together, everything should be fine now :)!

❕Now 3 clans' preset skills are available, you can pick from preset classes at the beginning.

You should know..
These are 3 separate clans which have different play styles and their own skill combos. Only One Clan Stance can be activated once, they offsets each other.

Rodent Clan
A clan lives in darkness and unspoken places. You can steal your targets' stats(Sitting Duck) and become yours(Petty Theft) by using some skills of this clan. This clan is ideally made for thieves but not confined to it, any class can access to it. It's the most powerful clan in the early or early-middle stage and its growth curve is smoother than other 2 clans', so even in the late stage it's still even in every aspect, no conspicuous shortage.

Conclusion: Rodent Clan is the master of snatching stats and fooling enemies around, the longer the battle lasts, the stronger it is(stacking stats from enemies). It may not has the most damage(however it does have the most sadistic ultimate) in the late game but definitely the most fun clan to play with.

Shark Clan
They are apex predators in ocean. This clan is served to make Hydrosophist Battle Mage, for such a long time Hydrosophist has been treated mostly as a support, now it's time for the comeback. You have chance to inflict Haemorrhage(Bleeding Damage) on enemies by using most skills of this clan, then you can trigger Bloodthirst (Haemorrhage is the premise for triggering Bloodthirst), which boosts your stats but lower your resistances. If you cast your skill upon Water surface or being Wet, you can activate Ocean Lord, which highly boosts your Hydrosophist ability. It's a tank in the beginning but will gradually become the most horrifying DPS as you level up.

Conclusion: Tanky and magically violent, but has a vacuum period after all damage skills are used for stacking Bloodthirst. It still preserves the function of a support and a disabler. An all-rounded clan in my opinion.

Hawk Clan
A clan rules forest and sky moiety.You have chance to suck AP and initiative from enemies(Roc Penalty) and become yours(Roc Bonus) by using some skills of this clan. You are granted 1 more AP Maximum and 1 more AP Start. You can also manipulate AP usage much more flexibly any anyone else. But it's extremely scared of being Flanked and Webbed! This clan is made the most suitable for rangers but still, there's no confinement.

Conclusion: It's the hardest clan among these three, but it's commensurate with this difficulty considering you can possibly eliminate all in the late games in 2 turns if use well. It especially suits people who like to calculate AP management or simply just like to have very much AP in hand, as who doesn't want infinite AP?

Skill List
There are still a lot that I can't elaborate in every aspect, because many skills and statuses are very hard to explained in short. Therefore I strongly recommend you to check the Skill List I adhere below:

And try to experience in game at the same time. Then you will have a comprehensive understanding.

Clan Bosses
Three clans correspond to three bosses respectively: Giant Rat, Jaws and Roc. They are all Lv.15 and located in somewhere in Reaper's Coast. A little hint: Sawmill, Oil Pump, Alice Alisceon. They possess all the common skills(not include the Lv.16 skill) of each of their clans, but Giant Rat is an exception. Beating them will give you their skill book in advance, but you can still buy their skill book when you hit Lv.17.

Additional
I primarily made this mod for fun so it may seems unbalanced(but I think no mod can 100% ensure it's balanced, and in fact I worked for quite a long time to make it balanced as much as I can and remain its playability at the same time). You may want to strengthen your foes in any way you want by any other mods. If you like this mod, please add to favorite and rate!

Statement
All the icons are reaped from Dota 2, this mod is only for personal entertainment use without other intentions.

Straelbora  [author] Jan 17 @ 5:30am
The bug of Hawk Clan's Reset spell has been fixed if you are using Divinity Unleashed Mod. They work perfectly fine now with each other!

Freedom-In-Moonlight Dec 23, 2021 @ 6:33am
Ok I need to see how broken Hawk clan is with Overlord Necromancy just to optimize the sheer amount of absurdist summon gank Im doing because hiding at the back of an undead host while sniping enemies is totally a valid strat!

silenticehunter Jul 9, 2020 @ 9:58am
can you make this avaliable for GM mode like the other version