Store Page
Ravenfield >  Workshop > Rummist (Nepster)'s Workshop
This item has been removed from the community because it violates Steam Community & Content Guidelines. It is only visible to you. If you believe your item has been removed by mistake, please contact Steam Support.
This item is incompatible with Ravenfield. Please see the instructions page for reasons why this item might not work within Ravenfield.
Current visibility: Hidden
This item will only be visible to you, admins, and anyone marked as a creator.
Current visibility: Friends-only
This item will only be visible in searches to you, your friends, and admins. 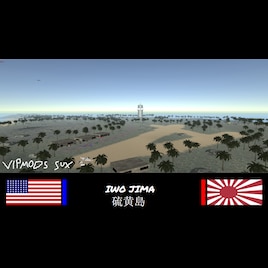 This item has been added to your Subscriptions. Some games will require you to relaunch them before the item will be downloaded.
In 1 collection by Rummist (Nepster)
Rummist's Mods

Iwo Jima is a medium sized, World War 2, Pacific themed island map that pits the USMC at a deployment area, where plenty of boats, and a couple aircraft are located, while the IJN has control of most of the island. Filled with dirt roads, a giant hill, and an airfield, the USMC, with their air and sea vehicles, must work together through flanking tactics, and effectively use aircraft in order to eliminate Japanese defenses on the island.

We are only a few steps away from reaching the Japanese mainland, and with our naval fleets gradually ripping through the Japanese defenses, it won't be an easy task taking such a small island either. Move in, and capture key strategic areas across this island, and it will open up multiple gateways to even more Japanese taken land.

Multiple enemy boats had been spotted advancing into one of our primary islands that is one of the closest to our mainland aside from the small islands southwest of it. The year before, we had built fortifications from this point that acts as both a launch off point, as well as a valuable position to us. Since the Americans are arriving on the island, we had already taken up strategic positions across the southern part of the island. Remember, no surrender, or else you are an utter disgrace to us.

Like Death Island, I had made this in a day, and it does show in a couple areas regarding quality, but it is good enough in my eyes to warrant it being worthy of being uploaded. This map was honestly a bit of a pain in the ass to do regarding the part where the USMC lands the island, and I was going to scrap this map simply because the AI was so dumb at not getting to where they are really supposed to be, but with some thinking, I finally got around to fix that one giant issue, and decided to have the boats move to attack all flags on the map from the deployment, that way there wouldn't be any bots just sitting around. So that's something fortunate. Also regarding this map that there is some slight lag if you use a lot of mods, but it's really not to the point where it was as bad as something like Quang Tri V1, and Fall of Saigon. That's with my rig at least. I recommend lowering the settings.

♥♥♥♥ you for stealing my mods, as well as steal everyone else’s mods, and making a profit off them, as well as the manchildren who didn’t even bother to pay 15 dollars to play this game, and download our mods from this site. You are nothing but degenerate trash that not only want to destroy a devoted creator through not paying for the game at all, but profit off our work. I will have you know that I, as well as many others in the Ravenfield modding community are displeased, ♥♥♥♥♥♥, and offended at you for what you had done. Usually, I am a pretty friendly person, but considering that you are the scum that refuses to be remorseful of your actions, I will be unique from the others I talk to, and it will be which by no one who interacts from me will deserve. And on a related note, you really want my maps, don’t you? You really want to get that sweet, sweet money, as well as others who didn’t buy the game by pirating this map? Well, guess what, loser? I had enough of you pirating my maps, so I recently decided to go on the offensive, and desperately rip you a new ♥♥♥♥♥♥♥ by talking ♥♥♥♥ about you so you won’t upload them, and also have text on the map saying that you suck. See how you like that for a change, loser. I hope your site crashes and burns, and you pieces of ♥♥♥♥ who install our mods from that site or from any other illegal website for that matter get arrested.

Also on a related note, if you are to visit the site, don't, or else you're giving them more money by going to their site. I highly suggest you get an ad blocker to avoid getting ads on there.

I do not own any of the assets, images from google images, music, and mods used at all. All rights go to those who had made them.
< >
15 Comments

hide5ing Nov 11, 2019 @ 3:47am
Best Iwo Jima map so far. It would be perfect if you could updates making Mt. Suribachi higher, steeper (to slower the land vehicles) and adding tunnels, bunkers inside the mountain.

Huassenbeiger Oct 23, 2019 @ 9:07am
Eagle won't use their vehicles to reach the beach. I'm using the LVT-4 and they get in but then they get out instead of advancing

Comrade Dispatch Sep 16, 2019 @ 2:42pm
one request
can you pls remove the trees and rocks at the end of the runway