Store Page
Unturned >  Workshop > One_Man_Operative's Workshop
This item has been removed from the community because it violates Steam Community & Content Guidelines. It is only visible to you. If you believe your item has been removed by mistake, please contact Steam Support.
This item is incompatible with Unturned. Please see the instructions page for reasons why this item might not work within Unturned.
Current visibility: Hidden
This item will only be visible to you, admins, and anyone marked as a creator.
Current visibility: Friends-only
This item will only be visible in searches to you, your friends, and admins. 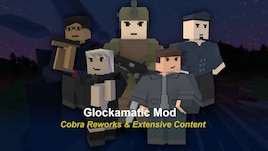 One_Man_Operative
Offline
See all 333 collections (some may be hidden)

This item has been added to your Subscriptions. Some games will require you to relaunch them before the item will be downloaded.
Description
This mod adds in reworked Cobras, its variants, new accessories & ammunition. Each of them are unique, from the compact Ringneck to the extremely versatile Ronin. For comfort, all pistols have legacy variants to respect the vanilla Cobra.

CHECK MY PROFILE TO SEE COMMISSION STATUS
Check out my profile to see if I accept commissions currently or not.

If you like what I do, consider donating to support my works. It helps me keep the motivation to keep making content for you guys!

ITEM DETAILS:
For item IDs, please do head to this link to a guide with all IDs of this mod:
https://steamcommunity.com/sharedfiles/filedetails/?id=2072664294

ITEM REAL-LIFE COUNTERPARTS:
This mod uses the ID range of 19700 to 19736. To use it at its best performance, please refrain from using other mods of the same ID range to avoid conflicts.

Copyright © 2019 by One_Man_Operative
All rights reserved

The re-upload of this mod and the contents whereof is not permitted unless under the user One_Man_Operative. Violation of this will result in a DMCA report and takedown of the illegal re-upload.
Popular Discussions View All (1)

DragonFire Mar 31 @ 3:27am
Hey I made a video about your Mod I hope this is ok https://www.youtube.com/watch?v=K2bJnOZl3ao

One_Man_Operative  [author] Sep 26, 2020 @ 10:14pm
I have checked the stabilizer for issues & so far there is none. Although please do report the bug again if it occurs on your side.

One_Man_Operative  [author] Jun 30, 2020 @ 4:00pm
Those clothes are not modded yet. As of now, they are not prioritized to make & some are unlikely going to the workshop.