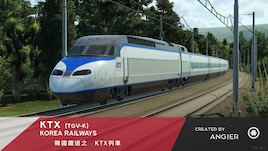 angier023
Offline
See all 43 collections (some may be hidden)

This item has been added to your Subscriptions. Some games will require you to relaunch them before the item will be downloaded.
Description
KTX is a high-speed train in South Korea. This train's design was based on the French high-speed train TGV-Réseau. Build by Alstom & Rotem. This train appears in a famous Korean movie "Train To Busan".

※ Headlights & Taillights
There is a limitation to this game. I am unable to make the light glow when the light is placed behind the glass.

※ Cars set
I always make sure there is a car set with the capacity around 100 and length around 200 meters even if that is not realistic. I find this condition is useful for the TpF gameplay.

※ Thanks for the response
Thank you for all the kind response in the past, but I am a bit reluctant to reply here due to the steam has a really bad comment system. So if you truly have the question for me you could go to the transportfever.net.

For those who has the interest toward my future production, Currently I have two goal. First, I intended to make a High-speed train of the world series. Since most of the High-speed train in the workshop are from Germany, France and China. So I decided to start making High-speed train from other countries such as say Japan and Italy, Second, I also going to make a series of trains of my country, Taiwan.

https://www.paypal.me/angier023
P.S. Of course. It's under the premise of you are not struggling with your life, I won't die if you are unable to feed me! Haha~ So don't feel compelled to do that and I will continue to release mods in the future. Have a good day!
< >
36 Comments

TheGreenFellow Jun 18 @ 2:49pm
About your car capacity numbers...I'm assuming that applies to all your mods. What would be the 'realistic' numbers, if I wanted to tweak things for my own uses? I'm familiar with editing the .mdl files myself.

BritishRail60062 May 19 @ 8:37pm
Thank you for this train. Would you consider making the UK Class 60 or the Bombardier Blue Tiger BR250 of Germany or the RENFE Class 319.4 locomotive of Spain in the future? I think these would look great and thank you for the mods for this game. It makes the game much better in my opinion.

MagmanCUBEN Aug 1, 2019 @ 4:29pm
Hi angier,I love your mods,their are really cool,I don't think you will respond or make it but I wanna ask you if you can make Electroputere LE 5100/ CFR Class 40/41/42. is a class of electric locomotives built for the Romanian Railways (CFR) for use on the Romanian electrified network.Oh and I'm gonna donate you some money these days I think,not very much but hope that you will apreciate it ! Keep making mods,we all love them ! :D