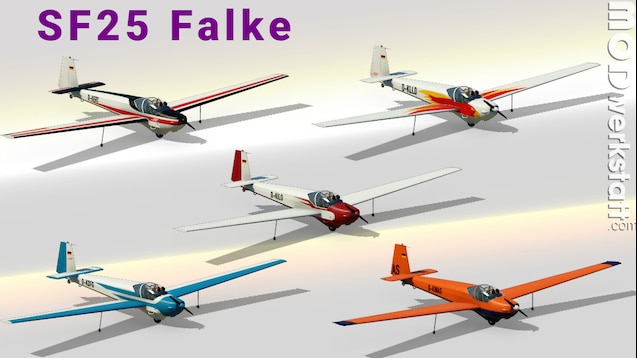 Bandion
Offline
See all 27 collections (some may be hidden)

This item has been added to your Subscriptions. Some games will require you to relaunch them before the item will be downloaded.
Description
The Scheibe SF-25 Falke (English: Falcon) is a German touring motor glider developed from the earlier Bergfalke glider by Scheibe Flugzeugbau. Since May 2006 the business has been run by Scheibe Aircraft GmbH.

The company had produced the Motor Spatz but decided to produce a better light aircraft based on the Bergfalke glider. It had a new forward fuselage with an enclosed cockpit with two side-by-side seats and originally a Hirth F10A2a engine in the nose. It first flew in May 1963 as the SF-25A Motor Falke. After an initial batch of aircraft the wing was lowered and it was renamed as just the SF-25B Falke. A number of variants were built with various engines and the type was licence built by Sportavia-Putzer, Aeronautica Umbra (Italy), Loravia (France) and Slingsby (United Kingdom). The current model is the SF 25C. It is currently available with a choice of three engines: the Rotax 912 80 hp, the Rotax 912S (100 hp) and the Rotax 914F3 (115 hp).