Store Page
Arma 3 >  Workshop > RKSL-Rock's Workshop
This item has been removed from the community because it violates Steam Community & Content Guidelines. It is only visible to you. If you believe your item has been removed by mistake, please contact Steam Support.
This item is incompatible with Arma 3. Please see the instructions page for reasons why this item might not work within Arma 3.
Current visibility: Hidden
This item will only be visible to you, admins, and anyone marked as a creator.
Current visibility: Friends-only
This item will only be visible in searches to you, your friends, and admins. 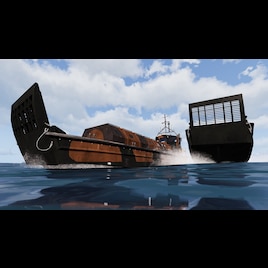 This item has been added to your Subscriptions. Some games will require you to relaunch them before the item will be downloaded.
In 2 collections by RKSL-Rock
RKSL Collection

RKSLA3-LCVP Mk5 FAQ[rkslstudios.info]
LEGAL DISCLAIMER
- RKSL Studios addons are distributed without any warranty; without even the implied warranty of merchantability or fitness for a particular purpose.
- The RKSL Studios addons are not an official Addon or tool.
- The use of these addons (in whole or in part) is entirely at your own risk.

FEATURES:
- > 3x Decal options switchable in EDEN Attributes:
- - - > Royal Navy,
- - - > Royal Marines
- - - > Generic - As requested by several Dutch Community members
- > NV/Thermal Obs camera in Commander's turret
- >2x Firing-From-Vehicles Turrets (Personnel Version only).
- >Option to open/close covers in EDEN attributes (Personnel Version only).
- >ViV can transport vehicles upto 12,000kg
- >De-Beaching Option - You will inevitably beach this at some point. If you don't have another vehicle to push it back this will save you. In the Driver's position at 0Kph you will see an option appear "De-beach" - this gives you a short shove backwards. Repeat as necessary until you are afloat again.
- > Version for each side:
- > NEW Skins
- - - > Generic Grey
- - - > OPFOR Camo
- - - > Civilian Yellow

BUGS AND FEEDBACK
We would appreciate hearing about any issues or suggestions you have experienced. Please use the Bug Tracker below:

CREDITS
This addons and model is 100% unique and does not incorporate any 3rd party content:

A3 Testing:
* Toxic Lemon
* Charlie's Hemorrhoid (I dont name them - but he is a pain in the arse)
* Devoted Stoat aka Jaime Smyth-Burton (No, he's not a Conservative MP)
* Generic Harmless Animal (Its his initials GHA, believe me this is the nicest version so far)
* Insoles aka Mark (he didn't have a nickname that he would tell us but he's a Royal Marine and we refuse to call him Bootneck)
* Kyle M
* JC (No, not that one, or the car guy)
* DarcyBA (Sorry pal i refused to type your full chosen name here)

Like this addon? How about buying me a Ko-Fi?[ko-fi.com]
Popular Discussions View All (1)

Guardian Sep 16 @ 2:12pm
Thats exactly what i needed, just not skilled with triggers, thank you so much

Guardian Sep 16 @ 10:43am
Is there any way to get the AI driving the boat to drop the ramp upon hitting the beach?

RKSL-Rock  [author] Aug 17, 2021 @ 10:09am
NOTE: You may not have experienced the issue because another addon you are using has it already loaded. Eventually as i go through all the RKSL Addons and update them, everything will require RKSL-Common so you might as well grab it now.

Sorry that was caused by a recent config update. The addon now requires RKSL-Common.

This moves the Faction Classes for everyting RKSL into a common source and acts a resource pool for scripts and objects.

Sorry for the inconvenience but it does make my life easier.

No entry 'bin/config.bin/CfgFactionClasses.UK_ARMED_FORCES' .
No entry '.displayName'.
'/' is not a value