Store Page
Arma 3>  Workshop > Mondkalb's Workshop
This item has been removed from the community because it violates Steam Community & Content Guidelines. It is only visible to you. If you believe your item has been removed by mistake, please contact Steam Support.
This item is incompatible with Arma 3. Please see the instructions page for reasons why this item might not work within Arma 3.
Current visibility: Hidden
This item will only be visible to you, admins, and anyone marked as a creator.
Current visibility: Friends-only
This item will only be visible in searches to you, your friends, and admins. 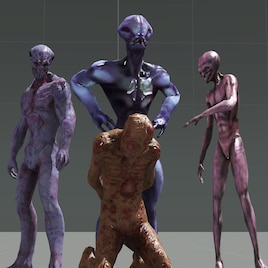 Mondkalb
Last Online
See all 186 collections (some may be hidden)

This item has been added to your Subscriptions. Some games will require you to relaunch them before the item will be downloaded.
Description
Created on 23rd May 2019 during the waiting period for the new Arma 3 Expansion. Many speculated that it will include aliens. But in case it does not, this quick addon will give you some solid quality aliens.

I've purchased thee alien character models from Turbosquid and made them usable within Arma 3. (Adjusting size and sekeleton to work).

The aliens speak their own language!

The creatures are found under:
Independent -> Aliens -> Men

Watch out for the Brute and Commander, as they are heavily armored. Bring enough ammo to take them down.
All Aliens are placeable by Zeus.

BrightCandle Dec 18, 2019 @ 8:55am
I couldn't really get them to fight properly. They just seemed to sort of stand there and do nothing or run away. Very odd AI behaviour.

Lemon Quat Oct 12, 2019 @ 10:51am
Use these extensively for my XCOM Campaign and they look great once they're given some weapons and armor from other modpacks.

King Crazy Sep 5, 2019 @ 10:28pm
I can't seem to find them in the Eden editor. I'm looking under Independent but nothing shows up. Anyone have any advice?

Cj Sep 5, 2019 @ 7:26pm
Can't edit Your Units in Orbat Creater Trying To change weapons so they spawn in with the weapons i apply anyone know why?

Shade251 Aug 19, 2019 @ 2:24pm
If you Download ME:OP and give them the collector weapons they look really bad ass, made a few ST:OP missions with them and they are amazing!