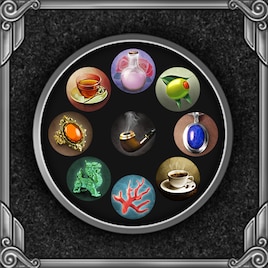 Baruthor
Offline
See all 2606 collections created by Baruthor and other people (some may be hidden)
You need DLC to use this item.

This item has been added to your Subscriptions. Some games will require you to relaunch them before the item will be downloaded.
In 1 collection by Baruthor
More Luxuries Collection

2 items
Description
DESCRIPTION
Adds nine more luxuries to the game and an additional Mercantile city-state luxury. Overall, they function the same as the existing luxuries and utilize the same placement and balancing methods.

Also, this mod fixes a few bugs found in the main map creation files and optimizes many other things within it that pertain to resources.

Terra “is” compatible, as a tweaked version is included within this mod. The extra luxuries work really well with the larger-sized terra maps.

Please ensure that any other mods you use alongside this one aren't overriding AssignStartingPlots.lua (or any of its contents that I've modified, if it's a map script). The order in which you enable mods matters. So, most times, make sure this one is enabled last, after any mods you suspect may have conflicting files, so that this mod does the overriding. Though, sometimes, you’ll find that things work when you enable another mod after this one. This usually means that an unimportant and probably unmodified part of this mod was overriding an important part of another mod.

Also, most mods which add more city-state luxuries shouldn’t cause problems with this mod. Just enable this one last so it initially cleans out any luxuries which may cause a conflict (or that are just plain redundant and have a different name… ex. Cocoa vs. Cacao vs. Chocolate) before it adds in the new ones.

TROUBLESHOOTING
While this mod is enabled, don't load existing games played before installing the mod. Also, when the mod is updated and errors are being experienced, sometimes it helps to start a fresh new game instead of loading a save from the previous version.

Sometimes it helps to clear out your temporary cache and ModUserData folders after disabling any other mods. The game will recreate new files the next time you run it. You can find these folders in …\Documents\My Games\Sid Meier's Civilization 5.

Also, sometimes it helps to delete all subscribed mods within the MODS folder located in …\Documents\My Games\Sid Meier's Civilization 5. When you run the game again, it will download fresh versions of all subscribed mods again; just be patient and let it finish. This mod in particular contains a lot of terrain graphic and icon art files, so its size is larger than most others.

Also, verify your game's files via Steam to make sure there are no corrupted files.
https://support.steampowered.com/kb_article.php?ref=2037-QEUH-3335

To avoid difficulties with mods and resolve them, see this checklist created by Thalassicus: http://forums.civfanatics.com/showthread.php?p=10901714#post10901714

If you'd like to enable the game to log information, you can greatly help in solving errors on your end. See whoward69's tutorial on how to easily set this up:
http://forums.civfanatics.com/showthread.php?t=487482
< >
734 Comments

Strathclyde Oct 26, 2020 @ 8:23am
I'm trying to play the Firaxis "British Isles" map with this mod but for some reason the amount of luxuries is WAY overtuned. I'm talking 4-10 instances of a single luxury at spawn. Anybody know how to fix this? I'm not able to set resources to "sparse" on the British Isles map either.

BillyJoelWilliamson Aug 5, 2020 @ 5:10pm
This was my first mod to Civ 5 it is working wonderfully and makes me very happy thank you for building this. Upvoted

Collya, my playgroup all recently got this mod working all of us have ancient ruins. Do you have any other mods running or just this one?

Lucius, the Heavenly Dragon May 29, 2020 @ 2:23pm
The Yogscast aren't using this mod as well. I've played Lekmod stand-alone before.

JayPeezy May 29, 2020 @ 2:16pm
I'm having a bug where I can't mine the resources, they show up on the map with tile values the resources brings but so far I haven't been able to put a mine on Amber or Lapis. The option to do it when a worker is on the tile just doesn't appear. I've cleared all the cache/mod data files, they've redownloaded and I'm also using LekMod but I disabled all the others. I know this mod and LekMod are compatible because the Yogscast used these 2 mods in conjunction fine, is it that I'm playing single player? Or that I'm playing Archipelago map? Any help would be appreciated.

n_e_painter Apr 17, 2020 @ 9:49am
I have only this mod enabled, have deleted the cache and moddata folder, and have placed these resources all in a cluster in a test map in the World Builder, but when I load the map in a normal duel mode, the resources do not appear. How do I get these resources to appear in the places I put them in World Builder? Can someone help?
< >