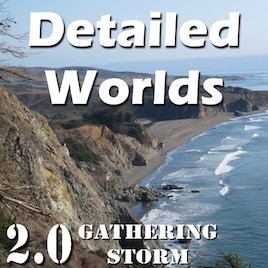 EvilVictor
Offline
See all 1207 collections (some may be hidden)
You need DLC to use this item.

This item has been added to your Subscriptions. Some games will require you to relaunch them before the item will be downloaded.
Description
Requires Gathering Storm Expansion
Not designed to be compatible with Yet not Another Maps Pack (YnAMP)
For bigger maps try Larger Map Sizes, it's compatible with Detailed Worlds

The Rise & Fall only version can be found here: Detailed Worlds 1.45

See my CivFanatics Discussion Thread[forums.civfanatics.com] for more images and the full update history. I am "Seven05" on CivFanatics.

Detailed worlds is my personal adjustments to several world generation utility functions and customized map scripts with added detail. The primary objective of this mod is to make the world more interesting, particularly with the detailed versions of the included map scripts. I believe that an interesting world is essential to having an interesting game, especially in a game like Civilization.

Basic Features
The following features will work on all random maps generated while this mod is activated:

*** Larger deserts without more desert tiles per map. While the deserts will be approximately the same portion of the world they will often be more cohesive resulting in a few larger desert areas rather than many scattered desert tiles. Grassland will also be less frequent, although still possible, on tiles adjacent to deserts. Deserts on "hot" maps will be more dispersed.

*** Reduced polar ice to help with circumnavigation (not really, most base maps are still horrible about putting land right up against the map edge).

*** Fixed rain forest/jungle placement. No more ugly band of rain forest tiles at the equator! Rain Forest/Jungle placement is now more dependent on the underlying map and will be more frequent in certain areas. Rivers and coastal areas can have large Rain Forest regions. The total number of Rain Forest tiles is the same as the default scripts (and affected by the rainfall option).

*** Adjusted marsh placement so marshes favor land near water (coast, lakes and rivers). The favoring is cumulative so a coastal riverside tile is much more likely to allow a marsh than an inland grassland tile but inland tiles are not prevented from having marshes.

*** Better volcano placement. Volcanoes will be more spread out and not be surrounded by mountains (3 adjacent mountains max).

*** Flood plains on every desert flat land tiles adjacent to a river. These flood plains will not be flooded by natural disasters, but they look identical to the new Gather Storm flood plains in-game. Be careful!

Detailed Maps
In addition to all of the basic features listed above, the new detailed map scripts also have the following special features:

*** Reduced polar land. 99.9% chance of being able to circumnavigate the world by boat. (Low sea level maps may still result in blocked passage)

*** New river generation. Rivers are now affected by the rainfall option in advanced setups (only when using a "Detailed" map script).

The following custom maps are included:
Continents - Detailed
The vanilla Continents map with all of the features of the Detailed Maps outlined above.

Pangaea - Detailed
The vanilla Pangaea map with all of the features of the Detailed Maps outlined above.

Small Continents - Detailed
My new "Small Continents" map that works much like the Continents map with more, and smaller, landmasses. There is no "ocean rift" created to force continental separation and there is a rule to ensure that the largest continent is less than 33% of the total land. Bigger than islands, smaller than normal continents! Good for games with more naval activity and landmasses that can fit multiple cities.

Fractal - Detailed
Fractal maps a generated using the same fractal code as the Continents, Pangaea and Small Continents maps with the restrictions removed. This will create random worlds with landmasses that may be huge or small. It will not generate the ocean rift used in continents nor will it limit the landmass size (max or min). It tends to create larger landmasses in testing, however it is entirely based on the random seed so you may encounter a streak of nothing but small continents and islands. I can't emphasize enough how purely random this map is.

Archipelago - Detailed
Unlike the default "Island Plates" map this will not simply generate a ton of islands. It tends to create a few "snakey" continents surrounded by many smaller continents with islands scattered around the map. To compensate for the small landmass sizes the sea level percents are reduced compared to the continental map types.

Island Regions - Detailed
A comination of continents and archipelago maps. This map will generate 2-3 large landmasses and multiple islands with varied open ocean space. Landmasses will prefer "blobs" but snakey continents are possible with at least one continent containing 1/3 to 1/2 of the total land.
< >
418 Comments

Lego Boba Fett Jan 21 @ 8:16am
Is this compatible with PerfectWorld6?

Silverson Nov 16, 2020 @ 9:52pm
This mod needs some love.The many recent updates have rendered it problematic.

dbspa Oct 30, 2020 @ 1:14pm
Is there a bug that prevents construction of a Dam next to a City Center hex? I have 2 desert floodplains on a Small Continents - Detailed map, both adjacent to a costal city, each of which othewise have 2 hex sides on the same river with no resources or improvements on them and the production que reports "no suitable location to zone this district". I've built Dam for 2 other cities on this map, though neither are immediatly adjacent to the City Center hex.

Cryo Oct 28, 2020 @ 6:37am
Hey just wanted to let you know that the vanilla Archipelago map doesn't work with this mod enabled for some reason.

pauloel7 Oct 25, 2020 @ 7:04pm
There once was a mod - no longer compatible with current game version - that allowed rainforest to spawn on grassland tiles AS WELL, just as they do on plains in vanilla. It felt more realistic and fair I guess. If that's gonna change, please consider that option.

Unusual Jester Oct 25, 2020 @ 4:10pm
I think it would look better if you could make rainforest appear on grassland instead of plains, for several reasons. Green is a nicer background for jungle and looks more "wet". It would also remove much of the rainforest adjacent to deserts. To compensate for the lost production they can give +1 production instead of food.