Store Page
Divinity: Original Sin 2>  Workshop > Thorstmixx's Workshop
This item has been removed from the community because it violates Steam Community & Content Guidelines. It is only visible to you. If you believe your item has been removed by mistake, please contact Steam Support.
This item is incompatible with Divinity: Original Sin 2. Please see the instructions page for reasons why this item might not work within Divinity: Original Sin 2.
Current visibility: Hidden
This item will only be visible to you, admins, and anyone marked as a creator.
Current visibility: Friends-only
This item will only be visible in searches to you, your friends, and admins. 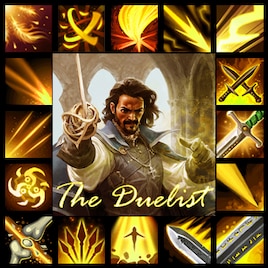 This item has been added to your Subscriptions. Some games will require you to relaunch them before the item will be downloaded.
In 1 collection by Thorstmixx
Co-Op Fun

Adds a new class to the game: The Duelist! A swashbuckling adventurer who swings around on chandeliers and rescues buxom maidens!

The concept behind the class is an honorable, lawful good type adventurer who wields a single blade and an empty off-hand. They are bound by a strict code of honor and their own sense of fair play. The duelist is all about being the hero that saves the day, not through world-bending magic, or sheer brute force, or even though sneaking and stabbing. The duelist saves the day with nothing but his honor and his unmatched mastery of the blade.

You can find the trader on the tower in Fort Joy, or in Driftwood or Arx (refer to the screenshots). There's S a skill chest on the beach in Fort Joy, and on the LV's lower deck.

This class mod is a personal creation that I've made 100% to satisfy my own need to play this kind of character in Divinity Original Sin 2, so don't expect Odinblade/Heleane quality class-building here, but I've tried to make it fun and flavorful, so I hope you'll enjoy it nonetheless. The skills give a different flair to vanilla skills as well as mixing warfare and scoundrel skills together.

About what I said earlier, the only weapon restrictions on the skills is that you have a melee weapon equipped, so you can dual wield while playing this class, but I'll be balancing it around using a single weapon, so you may find that the abilities could be overpowered while dual wielding. Speaking of balancing, this mod is very new and I haven't had much time to test the skills in actual gameplay yet, so any feedback on how strong or weak they are will be greatly appreciated, and I will tweak accordingly. Keep in mind that I use the word "Balance" quite loosely here, as these skills are meant to be and feel powerful. Both to make up for the lack of an offhand, but also to complete the class fantasy of a skilled swordsman.

That's pretty much it! Like I said, this is still very much a work in progress, and I'd very much appreciate any comments or suggestions for improvement. Special thanks to Andrine as well as LaughingLeader, OdinBlade, The Composer, RestingLichFace, Murderbot, Nimue and all the rest of the gang at the DOS2 Modding Discord who made this idea possible despite my ridiculous lack of modding-prowess. Also, if you're interested in making a class of your own, check out Helaene's Class making tutorial. It was absolutely invaluable in helping me get this thing made!
Popular Discussions View All (2)

NotSoNinjaJoe Apr 26 @ 5:16am
Who knows where the duelist's ring is? The one in Fort Joy? Can never find it and usually just give up on finding it for whatever run I'm on.

Fart Shartley Nov 16, 2021 @ 3:01pm
For some reason (probably the skills chest on the Lady Vengance) this mod causes Corbin Day to vanish from the lady vengance during chapter transitions. Does anyone know of a fix anywhere?

L115 Aug 26, 2021 @ 1:57am
The mod is great, the skills are all nice and useful when incorporated even into hybrid builds. Something I just want to suggest is giving the Band of Honor a drawback, like the Duelist Stance. It's insanely OP since anyone can pick it up and use it for the AP boosts regardless of class/build. Which is Ironic on how the ring is symbolic of your dedication to the Duelist life.

If the mod is no longer supported, can someone else let me know how to edit this so I can try making a patch myself?

Runic Tunic Mar 19, 2021 @ 2:32pm
Hey great mod! Thank you so much for making it. You definitely filled a specific niche of class that was missing from this game.

I don't know if you are still reading comments or even working on the mod anymore, but I wanted to report an odd bug. When using Beast, the unique stance does not seem to work and he instead assumes the default dagger stance. I double-checked by not only equipping the weapon to several different characters, but also buying another weapon classified as a finesse weapon to see if the stance would change. Everyone assumed the proper duelist stance except for Beast.

I want to clarify that this isn't the ability but merely the unique stance you made for characters holding a finesse weapon and nothing in the off-hand.
< >