Store Page
Transport Fever>  Workshop > TGR Studio's Workshop
This item has been removed from the community because it violates Steam Community & Content Guidelines. It is only visible to you. If you believe your item has been removed by mistake, please contact Steam Support.
This item is incompatible with Transport Fever. Please see the instructions page for reasons why this item might not work within Transport Fever.
Current visibility: Hidden
This item will only be visible to you, admins, and anyone marked as a creator.
Current visibility: Friends-only
This item will only be visible in searches to you, your friends, and admins. 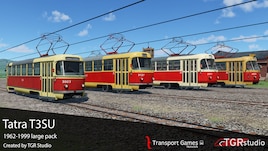 TGR Studio
Offline
See all 150 collections (some may be hidden)

This item has been added to your Subscriptions. Some games will require you to relaunch them before the item will be downloaded.
Description
Made by TGR Studio
http://tgr-studio.com
http://transport-games.ru
http://vk.com/transportfever

The T3 is a famous type of Czech tramcar produced by ČKD Tatra. Well-maintained tramcars of this type are very reliable, and a late-2000s study conducted on the Prague tram system has shown 98.9% reliability, the best of the Prague tram system fleet. During its period of production, between 1960 and 1999, 13,991 powered units and 122 unpowered trailers were sold worldwide, it is the most widely produced tram car in the world. The T3SU was produced for Soviet Union.

KarlCharlson Apr 13, 2019 @ 4:10am
Hello, I think these trams are fantastic, but they lack the sidecar to make this mod perfect. I mean such sidecar as in the picture here .:
http://www.patronenbaum.de/dd_strab/ddstrab%20(58).jpg
https://upload.wikimedia.org/wikipedia/commons/e/e1/Schwerin_Nahverkehr_Tatra_Beiwagen_2008-08-30_064.jpg
Please bring this sidecar out by update.

kacpermes Apr 2, 2019 @ 11:02am
Wow. Amazing photos. How to get those soviet blocks or that infrastructure (special tracks for trams, not only going through the road etc.