Store Page
Forts >  Workshop > SamsterBirdies's Workshop
This item has been removed from the community because it violates Steam Community & Content Guidelines. It is only visible to you. If you believe your item has been removed by mistake, please contact Steam Support.
This item is incompatible with Forts. Please see the instructions page for reasons why this item might not work within Forts.
Current visibility: Hidden
This item will only be visible to you, admins, and anyone marked as a creator.
Current visibility: Friends-only
This item will only be visible in searches to you, your friends, and admins. 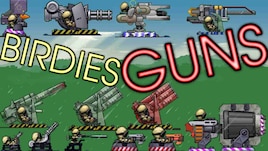 This item has been added to your Subscriptions. Some games will require you to relaunch them before the item will be downloaded.
In 1 collection by SamsterBirdies
SamsterBirdies big mods

----------------------------------------Weapons------------------------------------------
Roof Gunner & Minigun:
Shoot up into the skies and rain bullets down ontop of your enemies.
Hanging Gunner & Minigun:
Shoot downwards. the bullets float upwards.
Triple Shot Sniper/AP:
shoots three times before reloading (overheating)
Shotgun Sniper/AP:
Is it a shotgun or a sniper? Does it matter?
.50 Cal Machine Gun:
Its like a minigun but its not.
Molotov/Grenade/Pebble Slingshot:
Maybe they are short range, but who cares?
Archer/Rocket Archer:
Its like a sniper but cooler ok?
Triple Mortar:
It shoots 3 mortars. a heavy, a fire, and an emp.
Hanging Mortars (fire,heavy,triple):
Just a mortar, BUT it shoots downwards and floats upwards.
Barrel cannon/EMP barrel cannon:
Spawns a barrel at point of impact.
Mini Shotgun:
The workshop finally has some form of anti-air.
Mini Roof Shotgun:
Now shoots vertically to hit mortars.
Flaming Mini Shotgun:
Less usefull as AA but great at removing machineguns.
Periscope Minigun/Auto-cannon:
Fire rounds from behind cover!!
EMP/Napalm/HE Missile launchers:
More missiles!!! More more!!!!
Fog Machine:
Blow fog everywhere!!! Make the enemy not able to see and stop them from repairing and knock all the rockets out of the sky
Shield of Swarms:
Shoots circling swarms that protect you from projectiles
Flamethrower:
OK im allowed to make a flamethrower too. Not just lama.
Single-use EMP/Napalm/HE rockets:
A new concept where you pay to reload and have free firing.
Incendiary Rocket:
A rocket with that will send their base up in flames!
HE Shotgun:
An explosive shotgun
Large HE Minigun:
If you dont love huge miniguns with explosive rounds then we cant be friends.
30mm Artillery:
Shoot 4 rounds into the sky
Vertical Rocket Battery:
Launch 15 rockets into the sky and rain down havoc on your enemies.
Incendiary Vertical Rocket Battery:
Now with FLAMES.
Hanging Canon:
It shoots 3 cannon rounds upwards
Bomber Drone:
Launches a drone that drops a carpet of bombs.
Saw missile:
Launches a missile that shreds straight through wood.
Kinetic Beam:
Turns projectiles that pass the beam into green things that punch their base backwards
Shield Beam:
Reflects all projectiles back at the enemy
Drunk Beer Laser:
Makes all projectiles drunk.
Photon Compression Laser:
The scientist has found out how to slow the speed of light, compressing tons of energy into a laser beam. On contact with materials it explodes and vaporizes anything within its blast radius.
7 helicopters specific to each commander:
They fire lots of things then stop in front of the base to continue shooting, then they ram into the base.

Thanks han_karry for Chinese translation.

COPY INFO: Just copy whatever you want. or the whole mod. i dont really care.
Popular Discussions View All (1)

VenomlessCZ Oct 1 @ 12:40pm
@SamsterBirdies yep, that seems to have fixed the issue, thank you!

TheCombatFox Sep 8 @ 10:59pm
Bruh. My whole PC reboot by itself.
Don't worry tho... It's probably not your mod problem

SamsterBirdies  [author] Sep 8 @ 9:21pm
ive found and fixed a crash when the buster commander is selected. Can you guys confirm if this has solved the issues?

VenomlessCZ Jul 2 @ 4:24am
for some reason the game crashes when loading into a match. its a shame, coz this is one of my most favorite weapon mods for forts

AxesInMotion Jun 3 @ 9:52am
Same Here. This is the only mod I have downloaded that has this issue.