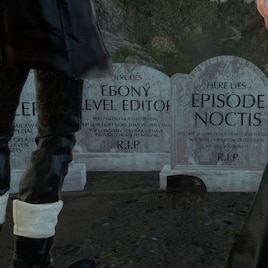 Glorious Gladio
Offline
See all 21 collections (some may be hidden)


I had to find some kind of outlet for that depressing livestream... I am very happy to still be getting the FFXIV crossover and Ardyn DLC, but the mass cancellations were heartbreaking.

This is a memorial mod for all the content that was struck down by SE: Episodes Noctis, Aranea, and Luna as well as the expanded and improved mod tools.

I could handle the loss of the episodes fairly well, but after hearing that Windows Edition production has concluded, it was like another more painful slap in the face.
The level building tool and a improved Mod Organizer (that could actually handle the game's assets) would have been a perfect send off for the many people that were promised these tools when they bought the PC version. Now that the story expansion of FFXV has been harshly curtailed by all these cancellations, at least having the modding tools would be some consolation.

PS. This is an outfit for Noctis, his head still floats above the headstones, while his friends mourn it's almost like he's still there...

FFXV will always have a special place in my heart~ but it is truly regrettable that we are left with a weak Mod Organizer and no level editor.

Ratzmoonmopes Sep 4 @ 4:24pm
Please add Platinum Demo, Episode Duscae, Moogle-Chocobo Carnival and Assassin Festival to this as well please. I am beyond devastated that those are gone.