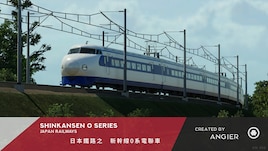 angier023
Online
See all 208 collections (some may be hidden)

This item has been added to your Subscriptions. Some games will require you to relaunch them before the item will be downloaded.
Description
The 0 series trains were the first Shinkansen trainsets built to run on Japan s new Tokaido Shinkansen high-speed line which opened in Japan in 1964

Thanks for everyone who responded positively on the message board. As for some common questions you guys asked, I would like to answer here.

1. Catenary and Track in the preview images.

It seems that catenary pole was from the other mod, but I am not sure which one that is. I added a lot of mods in the game early on so I always thought that was the default one.

The track is my own creation, that mod is nothing special and has a lot of problems, It's mainly for my own use. I might release it with the high-speed train station that I intended to make in the future.

2. The future plan for the Train mods

I intended to make a Taiwan railways series and a High-speed train of the world series. The other Shinkansens are among the latter one.

3. Price, Costs and the Balanced

That part of the game mechanism isn't really my focus, I don't even know how that works. So... maybe somebody can provide a proper setting for me?

I am Taiwanese, Not Japanese, I just like a lot of trains from different countries.

Any mod of mine can be convert to other game as long as you keep it "non profit", "notify me first" and "list me as creator".

https://www.paypal.me/angier023
P.S. Of course. It's under the premise of you are not struggling with your life, I won't die if you are unable to feed me! Haha~ So don't feel compelled to do that and I will continue to release mods in the future. Have a good day!

TheGreenFellow Jun 28, 2019 @ 4:21pm
I was wondering why the price was weird. Thanks for the fix info @Tactical_Combat_Peanut

And thankfully it seems like they made their own model instead of borrowing yours. I know of some developers who literally stole modding content for their games.

Tactical Combat Peanut Jan 10, 2019 @ 12:45pm
Proper pricing: for example, in file shinkansen_0_c1.mdl line 254, edit the price attribute's value to -1. Do the same modification for other mdl files for Shinkansen 0.

Probably the same changes will work for other Angier's fine mods.
< >