Store Page
Medieval Engineers>  Workshop > Equinox's Workshop
This item has been removed from the community because it violates Steam Community & Content Guidelines. It is only visible to you. If you believe your item has been removed by mistake, please contact Steam Support.
This item is incompatible with Medieval Engineers. Please see the instructions page for reasons why this item might not work within Medieval Engineers.
Current visibility: Hidden
This item will only be visible to you, admins, and anyone marked as a creator.
Current visibility: Friends-only
This item will only be visible in searches to you, your friends, and admins. 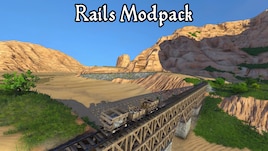 Equinox
Online
See all 387 collections (some may be hidden)

This item has been added to your Subscriptions. Some games will require you to relaunch them before the item will be downloaded.
Description
Getting Started
Try either the Introduction Video by EpikTek or the built in quests/tutorials that lead your through getting your first rails laid. If you're interested in learning about switches specifically there's the Switches Tutorial by Ivan_Cornelius
If you want to play around with the mod before you go to the trouble of laying your own track there's an example world.

Features
Wooden Rails
Cheap 10m sections of both straight and bendy standard gauge rail, made of 100% wood. You can't propel yourself faster than 8m/s on them and they have 4x the friction of steel rails.

Steel Rails
More expensive 10m sections of solid steel (or any metal) rail. They have a speed limit of 30m/s and no friction multiplier.

Bogies
A standard gauge bogie that you can attach whatever small grid blocks you want to featuring relatively low mass and friction. Additionally contains a modified bogie (handcart) that can be used by up to two players to propel yourself at 7m/s.

Switches
This pack features two types of switches. Single block solutions that have fully animated points, frogs, and guide rails but are limited to the shapes I've made (currently only a right hand switch since these are very time consuming). There's also a small block switch controller than can be placed near *any* junction point to control it, but doesn't animate the tracks themselves. A special thanks to Kreeg for making the external switch controller model when I really didn't feel like doing it.

Bugs and Future Plans
Special Thanks
Deepflame, for putting up with my whitelist requests and bug reports.
Stori3D_Past, shad, and Ivan, for providing some great feedback during development and a wonderful short switches showcase.
Epiktetus, for putting together the lovely trailer and getting started videos.
Kreeg, for helping me create the switch controller model.

Related Mods
Do you have a rails mod related to this? Let me know and I'll add it here.

FAQ
Why are there so many mods?
When you subscribe to this mod it will add 6 other mods to your world in the form of dependencies. I did this so as the collection of rail related mods I publish gets larger, and possibly gets some features that people consider too cheaty or not-medieval-enough people can individually choose what pieces they want.

I want to build a 5km rail network but I don't want to gather the resources!
Rails Modpack (Cheaper) is this exact same mod, but with the price of all rails roughly halved.

The engineer is a super man that can haul huge amounts of stone! Why can't I pull more carts?
Well now you can with the Overpowered Handcart for your unrealistic pleasure.

Xaerthus Dec 12, 2021 @ 2:16am
In fact, since that wasn't the first request, i added it back and will just include the restriction in our server tweak mod.

Xaerthus Dec 12, 2021 @ 2:08am
This is because the Industrial Modpack disables it to encourage looking for own solutions.

Pegas519 Dec 11, 2021 @ 6:13pm
i tried to build the handcart, it doesn't require any material and disappears after building it, so i can't pick it up and finish the quest. any idea. i am using the industrial mod

Gabesz77gaming Sep 18, 2021 @ 10:58am
Hello Equinox.It I'm writing to you because I have subscribed to Rails modes.When I did not work for me.I have tried in creative mode and in surviving mode too. We have not found anywhere in the game.Ped I have restarted my machine for sure of a sure-based basis. To me help where I was worried or what did not I noticed? I was looking for in the book even where they could learn things, but I did not find anything about it. Thank you for the help.

doubleAiden Jul 20, 2021 @ 7:38pm
martanovai, they both use the vrage 2.0 engine, so translating it shouldnt be too hard, the real problem would come from making it work with the space engineer code and functions. the mod, i presume, is a big one, and space engineers is pretty big and complicated too, so i would definitely say its not going to be an easy task, doable, but pretty hard.

martanovai May 20, 2021 @ 7:55am
So Mr mod creator how hard do you reckon would it be to make it work in SE? Just asking for future me who can program more then a explicit HTML message.

Paradoxx Apr 1, 2021 @ 3:46am
tested in .7 For the handcart make sure to be in the operating position, {F Key in the small floor either side} than run wile holding shift .your character uses stamina.
< >