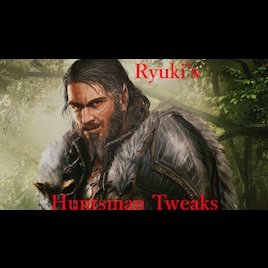 Ry
Offline
See all 87 collections (some may be hidden)

This item has been added to your Subscriptions. Some games will require you to relaunch them before the item will be downloaded.
Description
A small adjustment to the Huntsman skills intended to bring some of the less used skill in line (such as Mark and Snipe) while also giving small variations to a couple other skills.
This somewhat nerfs the class down for those wanting a slightly higher challenge with the Huntsman skills, while not making the class completely useless and giving it more utility instead of blatant damage output.
The high-ground bonus given inherently by the class isn’t something I can tweak easily, which will always eventually cause the class to deal ridiculous amounts of damage, but this should at least keep some of the skills more in line and make a few more appealing to use.
These changes also affect enemy NPC rangers as well, so it will change up your play style a bit as you now have to account for the new enemy ranger changes and utility as well.

Buff changes:
-Increased healing for First Aid.
-Pin Down now also slows targets for 2 turns.
-Mark now dazes targets for 2 turns.
-Ricochet buffed a bit from previous adjustments. The base damage overall does a good amount higher damage, but also equates to a total of around 15% of a damage buff compared to the vanilla skill. The extra targets take 1/3 of the damage as the main target overall.
-Snipe now will pierce up to 3 targets, making a surprise attack from stealth exponentially more rewarding if used from good vantage points. Base damage reduced to compensate for piercing buff. Cooldown also reduced from 5 to 4.
-Farsight now cleanses the Blind status and increases AP by 1 for its duration.
-Ballistic shot damage bonus increased from 5% to 6% to compensate for the nerf.
-Rain of Arrows now applies slow to targets for 1 turn and applies weak for 1 turn if they have no magic armor. This should help make the skill feel more realistic as an overwhelming rain of arrows is not something a target could just shrug off.
-Elemental Arrowheads turned into a toggle skill called Elemental Quiver. When using this on a surface, you will now gain a new “Cleanse Arrows” skill. The arrow enchant will last permanently or until cleared. This allows for more consistent and free use of a skill that normally loses its usability after For Joy and the starter island.
-Reaction shot now has a 3 turn duration, and fires up to 5 shots instead of 3.


Nerfs
-Multishot now deals less base damage (down to 43% from 60%) but can target up to 4 characters, bringing the net damage loss to a total of 8%. A minor nerf overall.
-Piercing Shot damage was brought down by 15%. This skill normally gets exponential damage gains when lining targets up properly, without any apparent negatives. I brought the base damage down to make the necessity of proper positioning more apparent instead of gaining full weapon damage on vitality every 2 turns.
-Ballistic shot base damage brought down by 10%. This skill normally gives incredible damage at range while taking zero penalty for firing at near-point-blank distance. This should keep the overall damage roughly the same amount, while also punishing the user for attempting to fire the shot at ranges closer than 3 meters.
-Pin Down base damage decreased by 10% to compensate for the extra slow status.
-Rain of Arrows base damage reduced by 10% to compensate for slow/weak application.
-Removed Crit from Farsight in exchange of AP gain.

If you're enjoying the mod, consider becoming a Patron on my Patreon![www.patreon.com]
< >
26 Comments

Ry  [author] Sep 28, 2018 @ 6:13pm
Shield throw is the HIGHEST scaled damage of the class and completely based on the armor of the shield. When combined with the change I did, this is going to have rippling effects on larger enemy groups, so long as you actually put the effort to keep your shield stats at the top shape.


Outside of that, it's not really possible to buff much about shield play in the warfare side of things without making new skills and/or changing the stats of the equipment itself, which isn't related to the class really.

I will be looking at making more class mods, possibly something utilizing shield play, but only once I've gotten moved and I finish the project I'm currently working on.

nordstern Sep 28, 2018 @ 5:54pm
is it possible to buff the gameplay with a shield? I like a shield, but its to weak for me to play as lone wolf. Even with 2x1handed it is better, because dodge > armor/stats in survivalbility.

Maybe add damagereduction or increase damage of throwing shield and reduce its cd-time.

Shade Sep 27, 2018 @ 5:05am
Now.. this may sound a bit insane. But... Would you, ever be willing, to allow -wands/a wand- to function with huntsmen skills? > _ > +cookies if they fire the elemental projectiles for the attacks. I miss how wands use to be "THE GOOD STUFF" back in Divinity: OS 1. But in this game... nothing works with them. Even staffs can use warfare, at the very least! Id love to see a wandslinger build be viable again.

Ry  [author] Sep 24, 2018 @ 3:15pm
Some of the stuff like damage types and definitions for stuff like invisibility are locked into the engine, so we can't really actually touch it as modders.

I am interested in why they make a difference between invisible and stealth. Both is in core the same: The enemy do not see the attack.

Ry  [author] Sep 24, 2018 @ 2:06pm
I'll check it out, but most of the mechanics like stealth and invisibility are definitions that can't be changed.

nordstern Sep 24, 2018 @ 2:00pm
Or make a change that all attacks from invisible counts like stealth-attacks...

nordstern Sep 24, 2018 @ 1:59pm
Maybe can you do this:
assassinate (correct name?) does bonusdamage in stealth. But invisibility is not stealth in the game. And sneak in a battle is not so easy. Can you change the ability, that the 50% stealthbonus also works for invisible (for example the polymorph-skill)?