Store Page
Divinity: Original Sin 2>  Workshop > Rendal's Workshop
This item has been removed from the community because it violates Steam Community & Content Guidelines. It is only visible to you. If you believe your item has been removed by mistake, please contact Steam Support.
This item is incompatible with Divinity: Original Sin 2. Please see the instructions page for reasons why this item might not work within Divinity: Original Sin 2.
Current visibility: Hidden
This item will only be visible to you, admins, and anyone marked as a creator.
Current visibility: Friends-only
This item will only be visible in searches to you, your friends, and admins. 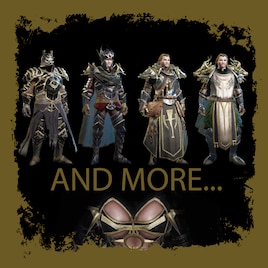 Rendal
Offline
See all 7693 collections (some may be hidden)

This item has been added to your Subscriptions. Some games will require you to relaunch them before the item will be downloaded.
Description
Allows player characters to get NPC exclusive (or otherwise unique) visuals, by applying the visuals to equipped items or spawning them as loot. Includes armor visuals as appliable and spawnable, and weapon/shield visuals as appliable. Also includes armor dyes.

HOW DOES IT WORK?
Gives a magic lamp to the player(s) upon entering the game, that when used initiates a dialog where you can select the options you want. Selecting an option in the dialog will apply the visual to your equipped items or spawn a sack containing the armor set into the player’s inventory. Note, that applying visuals will not change the color of the item. All armors will be the same level as the player, and have random stats. Rarity will be epic to divine depending on player level.

CURRENTLY INCLUDED VISUALS
(meatbag versions have the same visuals for undead also, and vice versa, but some may have clipping issues):

DYES
There will also be an option for a dyebox, that contain dyesets. Use crafting to combine a dyeset with an equipment piece to change its colors. Each dyeset has three colors. From left to right, they are the primary, secondary, and tertiary colors. An equipment piece may have all, none, or some of these color “channels”. Experiment with them to see what channels will stick to what equipment.

The dyes only work on equipment from this mod, but you can use an additional mod to make the dyes work on the regular equipment, with the side effect of removing color progression from them.
Dye vanilla armors addon for Rendal's NPC Armors and Weapons - DE

FAQ
Q: Armor X is not in the mod, can you include it?
A: Yes, possibly. There are still armors that I intend to add in future updates.

Q: The sets have different amounts of pieces, why?
A: The visual resources for most npc characters consist of fewer pieces than the player armors. For example, most of them have the boots and lowerbody in the same model. In these cases what you get is a single equipment piece (the pants), but when you equip it, you get visuals for your lowerbody and your boots. Also, the visuals of any boots you have equipped will disappear.

Q: This mod gives free epic gear. Could I have a toned down version?, Could I have just the visuals?
A: Definitive Edition has an option in the dialogue to disable spawning free loot.

NOTES
Whenever I add new armor options to this mod, I need to change the dialog (the part that shows you the options) and a story script (the part that spawns the stuff into player inventory). In order for the changes in the story script to take effect, the game needs to build the story for your save game. Building the story normally happens when you start a new game or add a mod to an existing save game. When starting a new game with this mod, or adding it to your save game for the first time, everything should work fine (no reported issues).

Problems can occur when the mod is updated and you had the previous version of the mod installed in your savegame. Rebuilding the story may fail to trigger, or it may fail to add the the new script functionality. When this happens you will likely see changes in the dialog, but the newly added stuff will not spawn. All the old stuff will work like it did before the update. This is a general issue with mods (at least ones with story scripts), and there is nothing I can do about it in my end. If a solution presents itself, then I will do my best to implement it. Hopefully Larian will be able to fix it. There are two ways you can try to make your save game rebuild the story. Solution A is easier, and seem to work in most cases.

Solution A. Before loading your save game, change the load order of your active mods. Any change should be enough. This mod should work at any position relative to other mods. The change should trigger story building when you next load your save, and hopefully fix the issues.

If you have more insight on the matter, or better solutions to solve it, your welcome to share them in the comments.
< >
153 Comments

Everyone has lives, and so do you, but can you give us a bit of news? :D

Dr. Pepper Jan 17 @ 6:31pm
DO NOT USE THIS MOD ON RELICS OF RIVELLON SETS IT WILL BREAK THEM. Armor will not level up or have any abilities from completing the full set. Ruined my contamination armor on an honor mode run. Also no way to change the appearance back once you change it.

Gyaru Nirriti Jan 4 @ 3:55pm
I *KNOW* its the most BASIC question to ask. But - in the off chance its not that way: "Is this mod's results clientside only?" I dont care about the stats it gives (for my first game), I just want the fashion piece of Malady. Usually the answer is *NO*. But what if it was part of some sort of glamour/crafting recipe/mechanic to change an armor's look thats possible for a few pieces? Thank you.

Bicyclist for Justice Nov 4, 2021 @ 5:52am
Can you add the blackring rogue armor or whatever its called, you have the witch armor, the priest one and the warrior one, but there's another one that's missing.

BarnabyTheJizzBunyip Sep 12, 2021 @ 6:43am
the armor sets and dyes make my characters hands and legs invisible! might be a bug?

Malhaloth Sep 10, 2021 @ 10:34pm
is it possible you could add an undead option for the paladin priest set? i like that look alot but the human part throws me off. maybe take the arm and legs/feet off another set that could cover those areas or have bandages on those areas

Maimbot6000 Jun 9, 2021 @ 10:11am
God I wish the dyes would work with armors from Crafting Overhaul, the multi-coloured dies are amazing and Crafting Overhaul's armors don't like them! I assume this mod is not longer being developed though...
< >