Store Page
Divinity: Original Sin 2>  Workshop > freeway's Workshop
This item has been removed from the community because it violates Steam Community & Content Guidelines. It is only visible to you. If you believe your item has been removed by mistake, please contact Steam Support.
This item is incompatible with Divinity: Original Sin 2. Please see the instructions page for reasons why this item might not work within Divinity: Original Sin 2.
Current visibility: Hidden
This item will only be visible to you, admins, and anyone marked as a creator.
Current visibility: Friends-only
This item will only be visible in searches to you, your friends, and admins. 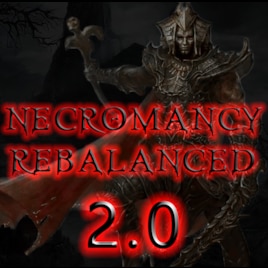 freeway
Online
See all 898 collections (some may be hidden)

This item has been added to your Subscriptions. Some games will require you to relaunch them before the item will be downloaded.
Description
This mod adds new Necromancy skills and improves upon vanilla ones as well, aiming to make a pure Necromancy playthrough all the more enjoyable, while keeping everything fair and balanced.

CHECK OUT THE MOD ON THE NEXUS! [www.nexusmods.com]

Be sure to rate my mod if you enjoy its content!

At long last 2.0 is out, and with it come 9 new skills with custom made icons to enrich your necromancer playthrough!

The goal is to make pure necromancy builds more viable and fun in the early-mid game reducing the need to rely too much on other types of skills and/or respecing before having access to Grasp of the Starved, while also keeping the skills as close to the vanilla game as possible.

The Trader can be found outside Fort Joy, on the ruined bridge in Act 1, and in the deck of the Lady Vengeance in Act 2 and on. (Location shown in the video)

This mod does not require to start a new game.

CHECK OUT THE VIDEO TO SEE THEM IN ACTION!

Skills are in order of Tier from Starter to Master

Novice skills:
Raise Undead Zombies: Raise 3 zombies to fight for you, they will act independantly and cannot be controlled. they have no armor but deal above average damage. Can be summoned alongside any other summon.

Bloodshift: Jump skill. Dissolve into blood and reappear at the target position, creating a blood puddle in the process. Designed specifically to give all races easy access to blood surfaces, synergizes with Elemental Affinity.

Adept skills:
Raise Undead Archers: Raise 3 skeleton archers, they will act independantly and cannot be controlled. They also have access to a variety of Huntsman skills. Can be summoned alongside any other summon.

Raise Death Knights: Raise 3 Grave Wardens to fight for you, they will act independantly and cannot be controlled. They also have access to many Warfare skills. Can be summoned alongside any other summon. Costs 1 Source Point to cast.

Blood Surge: Send a beam of blood that will split on impact up to 6 times. Can also explode corpses by targeting them. Cursed blood surfaces are created on impact. Enemies hit are cursed for 1 turn with Boiling Blood, which will make them explode on death, dealing massive damage to whoever is close by. Costs 3 Source Points to cast.

Skills are in order of Tier from Starter to Master

Mosquito Swarm: No longer a Single-Target skill, has a 1m AoE. Cooldown reduced to 3 turns from 4. No longer checks line of sight. Doesn't deal damage to self or allies.

Novice skills:
Infect: No longer a Single-Target skill, has a 3m AoE. Doesn't deal damage to self or allies. Damage reduced by 28.5% (Damage multiplier reduced to 100 from 140)

Rain of Blood: Changed to behave more like regular Rain (more surface covered in blood). Cooldown reduced to 4 from 5 turns.

Black Shroud: Increased AoE radius to 6m from 4m. Increased cast range to 17m from 13m. Now also applies Decaying permanently to all characters in target area upon use. AP cost increased to 2 from 1. Cooldown reduced to 4 turns from 5.

Totems of the Necromancer: Stat scaling of the totems was massively increased, resulting in much higher damage.

Descriptions of the skills were adjusted to better explain what they do and their new features.

This mod will be compatible with mods that add new necromancy skills, make changes to skillbook vendors, or character creation starting classes.

Almost all the new custom Icons were made by Dusk, the rest I made them myself.

SHOUTOUTS:
Assistance: LaughingLeader, SeINfEID, Feenex, Dashiku, Razor
Lots of love for all who helped me coming up with cool names for the new abilities on discord.
A huge thank you to everyone who helped me out in making this mod!

Back to Black May 6 @ 12:35pm
@alexandre.roy03 no, this mod is not compatible with Odin's Necro mod, coz both mods change vanilla skills. Though you can still play with both, but place in the right order in mod menu, depending on your preferences: Odin nerfs vanilla skills, this mod makes them stronger.

Oblivion Apr 22 @ 4:09am
how do i buy the books from casper? it just gives me an option to end the dialoge

alexandre.roy03 Feb 2 @ 7:21am
Is it compatible with: Odinblade's Necromancer Class Overhaul

dls Dec 24, 2021 @ 7:14am
Maybe you're right about good builds and damage. But as I said, we play with friends for fun. And all builds are about the same good / bad. But the fact is that with our bad builds before the knights of death, everything was about the same for everyone. And when our necromancer pick those skills - the whole party is no longer needed. I understand you might not want to waste time on such requests. Perhaps you will be so kind and tell me where and how this can be changed? Thank you for your answer.

freeway  [author] Dec 17, 2021 @ 5:45pm
Summon skills of this mod are already underpowered compared to regular endgame level mage builds or blood magic focused necromancer builds.
At lv15+ each character in your party should be able to handle fights solo in a couple turns if you build yourself correctly on tactician difficulty.
If anyone in your party of friends were using a optimized vanilla unmodded build you'd have the same problems only much worse (1 person ending major fights in 1-2 turns), this is a larger scale problem with the game's coop balance, my mod's summons are weak compared to what you can achieve in the vanilla game as I said previously, for instance this is what corpse explosion damage can look like with a decent build: https://i.imgur.com/nYPHH16.png
I recommend your party to respec your skill points into the proper talent and attributes and your friends should easily outdamage this mod's summoned minions.

jessevanbrabant Aug 26, 2021 @ 2:26am
I know this is a very strange place too ask this, but u seem to be very active :smile: so thought i would give it a shot. Could anyone make a summon pack for plants? (trunk, artillery plant, the big tree at the pool in the final act with a downscaled model). Would love too make a poison druid but can't really find a tree summon pack anywere... Sorry for the strange question

Also u did amazing work with the mod love it!