Store Page
Divinity: Original Sin 2>  Workshop > Muffiny's Workshop
This item has been removed from the community because it violates Steam Community & Content Guidelines. It is only visible to you. If you believe your item has been removed by mistake, please contact Steam Support.
This item is incompatible with Divinity: Original Sin 2. Please see the instructions page for reasons why this item might not work within Divinity: Original Sin 2.
Current visibility: Hidden
This item will only be visible to you, admins, and anyone marked as a creator.
Current visibility: Friends-only
This item will only be visible in searches to you, your friends, and admins. 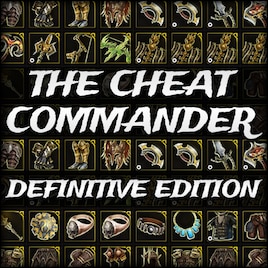 Muffiny
Offline
See all 4781 collections (some may be hidden)

This item has been added to your Subscriptions. Some games will require you to relaunch them before the item will be downloaded.
Description
Wanting to try out a new build you’re not sure will work without putting 15 hours into it? Looking to speed through the game quickly to gather info for wiki documentation? Simply like to cheat and have everything at your disposal? The Cheat Commander allows simple and fast character levelling, equipment generation, skillbook acquisition, gold and more, at any stage in the main campaign!

This mod is made to be easily enabled and disabled at any point during the campaign. Want to level up to 30 and deck yourself out in epic gear while still on the boat to Fort Joy? No problem. Anything you add to or modify on your characters will remain even after disabling the mod!

What can the Cheat Commander do exactly?
- Add small or large amounts of gold
- Add character experience
- Set your character to a specific level
- Generate full sets of legendary gear for your current character level
- Spawn items such as lockpicks, runes, purging wands or even swornbreakers
- Create every skillbook for any skill type (including combination books)
- Add extra attribute and talent points beyond your current level
- Add character tags, including hero and villain

Activating in an Existing Save Game?
While there should be no issues using this mod with a pre-existing save, the very first load screen when activating a mod in an existing save game can take a bit longer than usual, depending on your hardware and how far into the game you are in your save.

This is something that happens with all story mods, as the game has to reload a lot of information to merge the mod into your savegame. If you get through this long first load time, and then save the game, future loads go back to normal, so don’t worry about it happening every time!

Help! I can’t find the Cheat Commander!
First of all, make sure you’ve enabled the mod in the mod list in the main menu. If it’s enabled, make sure you’re looking in the right place! Each location is described in the above section “How do I use the Cheat Commander”. If you still cannot find the NPC, it’s possible your save game has lost him! This is a problem affecting a couple of users that I have so far been unable to figure out why he no longer wants to appear.

However! With the new addition of the Cheat Book, you should be able to summon the Cheat Commander anywhere, even if he has decided to stop showing up at his normal spawn locations!

Help! The mod isn’t even showing up in my mod list!
If the mod isn't showing up in the list, it's something outside of my control, because that means that the mod isn't even in the game. Basically steam either hasn't downloaded it, or the game itself hasn't copied the mod out of the download folder.

If you're up for some manual looking into it, check the '..\Documents\Larian Studios\Divinity Original Sin 2 Definitive Edition\Mods' folder to see if the pak file is there. Given these comments here and on other mods, a few people seem to have issues in the Definitive Edition of the game with Steam not copying mods to the Documents folder. If the pak isn't there, you can search the '..\SteamApps\workshop\content\435150' folder for *.pak files and copy the recent ones there manually.

If that doesn't help, you can try deleting the modsettings.lsx file in your profile folder. The game should then recreate it the next time it is started, from the mods in the My Documents folder.

Thank you!
I hope you enjoy the mod, thanks for checking it out! I’d like to add more options over time, but real life has become very busy for me over the last couple of years, so I don’t get a lot of time for modding anymore. However, I always try to make sure it still works on the latest version of the game, and hopefully get some time to add extra features every so often!

The mod is also available on Nexus Mods:
https://www.nexusmods.com/divinityoriginalsin2/mods/153/
Popular Discussions View All (2)

fneaor Apr 19 @ 1:02am
Can it spawn the "withered heart" from Zaleshkar? My group is past fort joy and our sebile killed him. Aaaand we forgot what we did to the heart, but apparently sebile did not eat it, soooo

Bear Sheriff Apr 18 @ 12:16pm
So this didn't work for me on workshop. Even tho i was subscribed steam never downloaded the required files. I then went to Mod Nexus and got the files, put them in myself and it worked. It seems like many people are having this issue.

OmegaSai Mar 13 @ 7:24am
Mod does NOT work. Ive tried subbing and unsubbing multiple times. Yes its loaded in the mod menu. It just does not work

Jyeon Feb 23 @ 3:40am
for some reason when i play this mod, there is no cheat book in my character's inventory. and 3 other random characters which i did not make partying with my character.. how do i fix this problem? i resuscribed this for 3~4times but still same issue

Kitt Jan 22 @ 7:39am
new to modding divinity os2de, will removing the mod from my playthrough break my save?

Taiga Jan 20 @ 7:45pm
Please add the option to add the UNDEAD tags please ! I'd love to play as an undead as main character, but very much dislike their looks