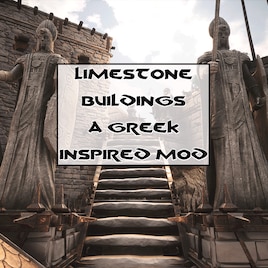 This item has been added to your Subscriptions. Some games will require you to relaunch them before the item will be downloaded.
In 1 collection by Multigun
Bulding and Placeable Mods That Work Great With LBPR

Mod should work fine for 2.1

Mod Updating Guidelines
If you are having trouble updating the mod, please visit this documentation.[docs.google.com]

Mod Being No Longer Needed
Yes, I'm aware that Jewel of the West and Architects of Argos exist. This mod was made in 2018 specifically for a server. It was never meant to be professionally made (we're amateur modders, not professional 3D artists. If we were, you wouldn't be reading this). It was just meant to fill in a gap for a specific server need, and do it for free. And it did that. Feel free to not use the mod and use the available, high quality DLC's instead.

This mod was originally designed for a Greek based server for a friend of mine, which has been closed down until further notice. While the server goes dark, the work continues. As always, I (Multigun) have certain goals and objectives for all of my mods, and Limestone Buildings is not done reaching those goals. For now we (Operator and I) wanted to make sure and keep the mod available.

The texture art was done by Operator, while Multigun did all of the back end work to get the mod functional and up and running. The texture was designed to look similiar or close to that of real Limestone to imitate what the Ancient Greeks used. Other then the stone color being changed, none of the other textures have been touched at this time, though is subject to change. No other items were affected either or added, just the buildings.

A Note About the Screenshots Used
The screenshots were created and taken by the wonderful screenshot and building extraordinaires, Deaso and StahlPunk. The screenshots utilized some items from the Aquilonian DLC (such as the statues and banners). The building system itself was made possible by one of my other mods, Less Building Placement Restrictions - Overlaps Edition. This was done to get the shots that we wanted to really showcase the potential of this mod.

Future Development and Feedback
There are no real major plans to expand on this mod. Since its release in 2018, two official DLC's more than fill the "Greek theme" role, being that of Jewel of the West and Architecture of Argos. The mod will likely receive at least one more update to implement various optimizations I've learned since making it in 2018, but that will be about it.

Unsubbing Warning
It should go without saying, but if you build something with this mod, and then later remove the mod, anything built using the Limestone buildings will result in a loss of that architecture as your game will no longer detect those assets.

Mod Load Order
Here is a list of my mods related to Limestone Builders, as well as best spots to place other mods, and what their load order should look like.