Store Page
ARK: Survival Evolved>  Workshop > Emoonya's Workshop
This item has been removed from the community because it violates Steam Community & Content Guidelines. It is only visible to you. If you believe your item has been removed by mistake, please contact Steam Support.
This item is incompatible with ARK: Survival Evolved. Please see the instructions page for reasons why this item might not work within ARK: Survival Evolved.
Current visibility: Hidden
This item will only be visible to you, admins, and anyone marked as a creator.
Current visibility: Friends-only
This item will only be visible in searches to you, your friends, and admins. 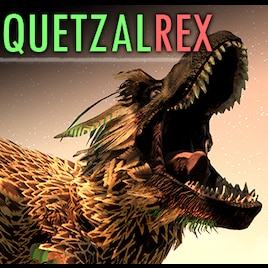 See all 1736 collections (some may be hidden)

This item has been added to your Subscriptions. Some games will require you to relaunch them before the item will be downloaded.
Description
Ride and fight a mythological feathered god Rex!

A fully new dino with brand new animations, textures and model is waiting for you!
Ride on the back of this legendary and powerful creature to rule the earth!


The Quetzacoatlosaurus Rex is the middle ground between the Aztec god Quetzacoatl and the Tyrannosaurus Rex, with entirely custom made textures and feathers, as well as everything else such as animations and model. All design are personally made. As a summer project, it was a real ride to create it, with ups and downs that i have learned a lot from.

Still, i am quite happy with the result, and believe you will have a lot of fun with this Rex, since he is currently my pride and joy, and quite fun to use.

Don't forget to drop a like/comment if you enjoy the mod, it's super helpful as this is my very first mod!


AS OF August 7th : Due to popular demand, added roar, swing tail animations, and better animations in general. Edited sound effects to be more like popular demand. Fixed dead feathers and textures. Have fun!

More of my art : https://www.artstation.com/emoonya

^ (Shows up as a dilo egg, but functions as quetzalrex, it's just the name)

1: What saddles does it use? where/how can i make a saddle?

I will not give him a saddle as he is still a god and should not be on a leash. However, he will automatically gain armor upon taming to make up for the fact he wears no saddle


2: Is it only a reskinned model of the Yuty/Rex?

No, everything is originally made by me, a Character Artist student.

I made him spawn on Ragnarok, The Island and Abberation. Don't know yet if i'll manage to make him spawn in other maps.


4: What's the balance on this thing?

Rather powerful, but less so of a gigant. I believe he should stand out as powerful, but i do not wish to make a one-shot kill dino with overkill stats as i believe this ruins the fun of the game.

No idea, have not been able to test this function yet, but everything is supposed to be functional. It should look like a Rex's or an Allo's egg. Eggs are spawnable and are functional.
Popular Discussions View All (18)

How I feel this thing should work (Just ideas, not demands)
Dark Star Raven

HydragonofDeath Sep 12 @ 1:50pm
Shouldnt a lvl 210 spino deal more damage than that though per hit?

AlterAngelus Jul 4 @ 9:57am
@Public_Enema Yes it spawns on the Island map I have seen 3 in the few hours that i have been playing with this mod.

Johnson Jun 30 @ 9:32pm
does this mode work on the Gen2? summoned this dino but it was invisible and no interaction was possible.