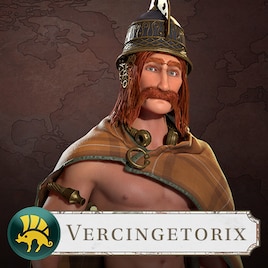 This item has been added to your Subscriptions. Some games will require you to relaunch them before the item will be downloaded.
In 1 collection by sukritact
Sukritact's Civarium

This mod is compatible with, but does NOT require the Byzantium & Gaul Pack DLC.

If you do NOT have the Byzantium & Gaul Pack activated. This mod adds Gaul as a new custom civilization, led by Vercingetorix as detailed below.

With the Byzantium & Gaul Pack activated. This mod adds Vercingetorix as an alternate leader to Gaul, and adds a game mode to adjust Gaul's uniques and abilities to work more like the original mod!

In 58 BC, Julius Caesar’s year as consul had come to an end, and he was appointed proconsul of Cisalpine Gaul, a place whose history is a much-debated topic among historians both modern and ancient; a place which some argue did not exist until Caesar’s arrival. Gallic tribes have been in the region referred to as Gaul for as long as historians have recorded the history of the area, and even before.

Revered in France as its first national hero, Vercingetorix managed to unite several sovereign Celtic tribes to do battle against the aggressive Romans. Vercingetorix was an Arverni, one of the many Celtic tribes who ruled over what is today modern France.

Unique Improvement: Dunon - Unlocks the Builder ability to construct a Dunon, unique to Gaul. +1 Food, +1 Housing. +1 Production if built on a Hill. Occupying unit receives +4 Defense Strength, and automatically gains 2 turns of fortification. The Dunon must be built on a Camp or Pasture resource and provides that resource's yield modifier to adjacent tiles. One per City. Tiles with Dunons cannot be swapped.

Leader Ability: Gallic Confederation - Your units receive +1 Combat Strength for each type of City-State you are Suzerain of. Receive a free Envoy whenever you recruit a Great General. When an Encampment or Dūnon is built, receive Ancient Walls in that City.

Agenda: King Over Warriors - Likes civilizations with strong armies, but only if they don't own any captured cities.

Credits and thanks to Rıaın for Vercingetorix's audio! He did an incredible job, not only with the voice acting work, but with reconstructing the Gaulish for this project.

Please support me on Patreon![www.patreon.com] It ensures I can keep making, civ, alt. leader, natural wonders, UI mods, you name it! No matter if you're donating 1 dollar a month or 5 or more, it all adds up and is immensely appreciated!

赵子虫 Apr 22 @ 10:50am
哇，这个mod成功让没有订阅拜占庭和高卢dlc的玩家玩上了高卢文明，做得相当逼真，有没有考虑过再做一个关于查士丁尼的拜占庭文明mod？
Wow, this mod makes it possible for players who don't subscribe to Byzantine and Gallic DLC to play Gallic civilization, have you considered making a Byzantine civilization mod for Justinian？

A Bear. Aug 31, 2021 @ 5:57am
I dont have the Gaul DLC, and have Rise and Fall and Gathering Storm installed. The civ works fine, but for some reason, the option to build the Dunon doesnt exist? I cant seem to get it working. Is it unlocked via tech? Or a civic?

Husk Aug 26, 2021 @ 12:42pm
For some reason the mod isn't working for me. I tried disabling all other mods and DLC, but he just doesn't want to show up on the civilization list

Primo96 Jul 24, 2021 @ 6:19am
I am learning to mod a little only for my own use and trying to move uniqe units from one mod to another, but I am not doing well. For Example I trying to move Mynisi unit as the second UU from your Burma mod to your Siam mod, however no successfull. Its hard work!

Primo96 Jul 24, 2021 @ 6:13am
Thanks Sukritact for answer, but I loved Oathsworn and I changed a little in game files for my own use. I make the Gaesatae replace the Spearman and Oathsworn replace Swordsman, and with Carrus from the Stell and Thunder mod, I had three unique units. it's a pity that it doesn't work anymore.

sukritact  [author] Jul 24, 2021 @ 3:46am
@Primo96: Yes, but if you really want the old gameplay, enable the rework, then in advanced setup there's a Rework++ that restores the Dunon and the gives the old Oathsworn ability to the Gaesatae: https://i.imgur.com/np3s3Cy.jpeg
< >