Store Page
Crusader Kings II>  Workshop > EtienneTheMonkeyman's Workshop
This item has been removed from the community because it violates Steam Community & Content Guidelines. It is only visible to you. If you believe your item has been removed by mistake, please contact Steam Support.
This item is incompatible with Crusader Kings II. Please see the instructions page for reasons why this item might not work within Crusader Kings II.
Current visibility: Hidden
This item will only be visible to you, admins, and anyone marked as a creator.
Current visibility: Friends-only
This item will only be visible in searches to you, your friends, and admins. 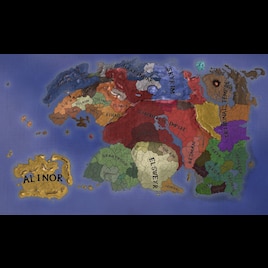 LeSingeAffame
Offline
See all 468 collections (some may be hidden)

This item has been added to your Subscriptions. Some games will require you to relaunch them before the item will be downloaded.
Description
Elder Kings is an Elder Scrolls total conversion mod for Crusader Kings II. UPDATED FOR HOLY FURY.

Visit our Discord server at: https://discord.gg/4z7Bygq

ELDER KINGS REQUIRES NO DLC. However, Elder Kings is compatible with every DLC and we recommend the following in particular:

Set during the turbulent Second Era, Elder Kings features thousands of playable characters across all of Nirn with gameplay spanning almost 1600 years. Current bookmarks include:

-Play as a lowly Count or mighty Emperor anywhere in Tamriel, Akavir, Yokuda and Atmora.

-Join the Elder Council and steer the remnants of the Empire through the Second Era...or seize control of the Council as High Chancellor or Emperor.

-Join one of many guild societies across Tamriel, Yokuda and Akavir, including the Companions, Mages Guild, Morag Tong, Thieves Guild, Sword-Singers, Great Houses of Morrowind, and more. Unlock powerful specializations, improve your education, make friends and enemies and take on guild jobs.

-Align yourself with a Daedric Prince or the Ideal Masters, and bargain to receive powerful artifacts and boons, including the ability to call forth an invasion from a realm of Oblivion.

-Join the Tribunal Temple and win the favor and boons of the Almsivi: Almalexia, Sotha Sil, and Vivec.

-Unlock your power as a Dragonborn: travel to High Hrothgar, study the Thu'um, acquire the Amulet of Kings and light the Dragonfires to seal the liminal barriers.

-Study tomes at the library to hone your skills, and travel to the marketplace to purchase mounts and pets.

-Conquer the world and claim the Ruby Throne as Emperor of Tamriel!
Popular Discussions View All (174)

Does joining a daedric cult have any huge benefits?
ඞ
< >
3,533 Comments

Wilberator Sep 16 @ 6:44am
This is absolutely incredible, the only thing that could possibly be better would be a Discworld mod XD

Tinklebro Sep 2 @ 3:11pm
Just curious are there gonna be any more updates to this mod? I like a lot of the features of this mod but I wouldn't mind seeing some more landmarks like the blue palace or samuruik.

miningmaster99 Aug 28 @ 10:52pm
I have come to love this mod, it's amazing but can you please fix the sketchy cheat menu mod not being functional? it's like one of the most integral mods to ck2.

Andre Grande Aug 24 @ 11:48am
Is this natural or a bug? Every time I inject members into the Imperial Council, swaths of them die in like 3-5 years and I'm back to 3-8 members meaning I'm below the voting threshold. So essentially my government is paralyzed, we cannot vote on anything. And it's not like I can seize power from a dead council like what would happen irl. I'm just cucked and cannot do anything. And every time they try to open up a vote to add more members, 8/10 they just deny them into the council. At this point I'm looking for ways to cheat in parameters that make them more likely to be voted in. Because it doesn't matter if they're an aristocrat in a 90% aristocratic council or an imperialist in an Imperialist dominated council. They almost always get turned down, and the numbers of members on the council just continually shrinks. And the influence cost of adding members to the council via request is way too fucking high