Store Page
Transport Fever>  Workshop > Spearin's Workshop
This item has been removed from the community because it violates Steam Community & Content Guidelines. It is only visible to you. If you believe your item has been removed by mistake, please contact Steam Support.
This item is incompatible with Transport Fever. Please see the instructions page for reasons why this item might not work within Transport Fever.
Current visibility: Hidden
This item will only be visible to you, admins, and anyone marked as a creator.
Current visibility: Friends-only
This item will only be visible in searches to you, your friends, and admins. 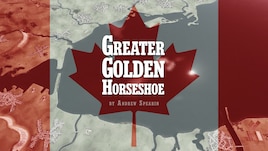 This item has been added to your Subscriptions. Some games will require you to relaunch them before the item will be downloaded.
In 3 collections by Spearin
Canada Collection

87 items
Description
Welcome back to the Greater Golden Horseshoe! This region encompassing the western shores of Lake Ontario and eastern end of Lake Erie is one of the most important economic regions in Canada.

About the Map:
Since the previous version of my Golden Horseshoe map was made, there have been improvements to the base Transport Fever game and a brand new map making tool[glatar.hu]. With nearly 4,000 downloads, a 40+ hour series by Slim Gaming featuring the map, new asset mods including GO Transit and VIA Rail, plus the prospect to use this map as a teaching tool for Supply Chain Management students at Mohawk College in Hamilton, I decided to revisit and improve the map almost from scratch.

Changes from the ‘Golden Horseshoe Beta 3’ version include:

By subscribing to this mod, you will receive three versions of the map:

The GGH extends from the Niagara region in the south-east, and runs along the shore of Lake Ontario. At the head-of-the-lake is Hamilton, home to Stelco and Dofasco steel mills. Following the 403 and Queen Elizabeth Way highways brings traffic through Burlington, Oakville, Mississauga, and into the Ontario provincial capital of Toronto.

The Greater Toronto Area (GTA) is Canada’s most populous city, incorporating outer suburbs of Etobicoke, York, Scarborough, Vaughan and Markham. Commuter hubs east of Toronto are growing to round out the Golden Horseshoe at Oshawa.

About the Author:
Andrew Spearin is an award-winning designer and director. He co-founded the Insurgency mod for Half-Life 2 in 2005, and later was creative director on the 2014 commercial release of Insurgency. Spearin also worked as a designer and led marketing efforts for Day of Infamy. Currently he is working on contracts for Offworld Industries (Squad; Post Scriptum) and Moonray Studios (Debris). Starting fall 2018, Spearin will be a professor at Mohawk College, while helping lead special projects through the college’s Game Dev Club. He lives in Hamilton, Ontario with his dog Lewis.

Like my work? Want more? Please click Like, Favourite, and if you're feeling generous, please donate[www.paypal.com] to compensate the many hours it takes to create this work.
< >
14 Comments

TackleIssues Apr 19 @ 2:04pm
There's a way to place the industries outside the map when you build it, i think it was putting them in the bottom left and top right corners..

Class Conciousness Dec 11, 2019 @ 3:06am
Any plans on bringing this map to tpf2? Absolutely amazing map thank you for countless hours of fun I've had on it

moisanclaude Aug 18, 2018 @ 6:30am
Nice map!! I am playing the No Industry map, for some reason I can't connect a line to the industries I build. Any thought on way that is?