Store Page
Surviving Mars >  Workshop > Draco18s's Workshop
This item has been removed from the community because it violates Steam Community & Content Guidelines. It is only visible to you. If you believe your item has been removed by mistake, please contact Steam Support.
This item is incompatible with Surviving Mars. Please see the instructions page for reasons why this item might not work within Surviving Mars.
Current visibility: Hidden
This item will only be visible to you, admins, and anyone marked as a creator.
Current visibility: Friends-only
This item will only be visible in searches to you, your friends, and admins. 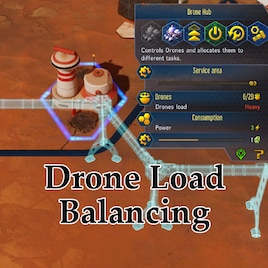 Draco18s
Online
See all 136 collections (some may be hidden)

This item has been added to your Subscriptions. Some games will require you to relaunch them before the item will be downloaded.
Description
This mod automatically reassigns drones from low-load hubs to heavy-load hubs every hour. Drones are moved from the highest-population low-load hub to the lowest-population heavy-load hub in order to balance the load between hubs. Compatible with Below and Beyond update! The update only provides a notification that a hub is under heavy load, DLB's notification is when a hub is under heavy load and has the maximum number of assigned drones.

if Mod Config is available, the number of drones reassigned every hour is configurable. Otherwise the default value of 2 is used (range: 1-10). Can also control the minimum number of drones (for default hubs and tech-upgraded hubs separately).

Reassigns are handled via converting drones to prefabs and reconstructing them, avoiding travel time and possible battery issues. Low-load hubs with fewer than 5 drones are never considered. Stockpiles of drone prefabs will be assigned to heavy-load hubs at the same rate, if enabled via Mod Config.
< >
137 Comments

Draco18s  [author] Dec 12, 2021 @ 8:47am
Interesting, thanks for the extra info. Won't have the capability for looking into this in some time (lack a Windows machine at present).

ExavierMacbeth Dec 12, 2021 @ 8:34am
Definitely Sure. Only mod I had installed that affects the Drone Hubs and the issue does not present itself when I disable your mod (Though any existing glitched range UIs still remain, my guess baked into the save). But like I said it only occurs when you use the prefab repack function... just dismantling the hub into resources does not glitch it out.

My guess would be the fact that the Hub & 6 drones getting removed as part of the repack effect is causing something to throw a null object error. Probably not clearing the scripts cleanly.

Draco18s  [author] Dec 12, 2021 @ 8:20am
I have no idea why my mod would cause that behavior, that's really weird ExavierMacbeth. Are you sure it's my mod (have no other mods installed, vanilla does not show the issue)?

ExavierMacbeth Dec 12, 2021 @ 3:49am
Found a bug for you.
When you pack a drone hub back into a prefab (Prefab-Refab Tech under Recon & Expansion Tree) while this mod is installed that Hub's drone range for the building shows up and becomes permanently displayed & stuck in place.

Tremualin Sep 8, 2021 @ 8:29pm
Seems like you left the developer debugging on. It spams the log file with Drone Load messages.