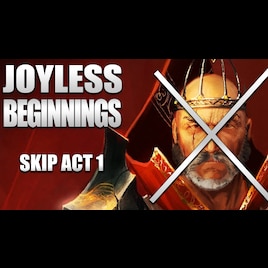 This item has been added to your Subscriptions. Some games will require you to relaunch them before the item will be downloaded.
Description
UPDATE 19/03/2018: Multiplayer is now fully functional! All known bugs have been fixed. Thanks to LaughingLeader and The Composer for giving me tips on how to fix it.

So you want to start a new game, but you can't be bothered to go through Fort Joy or the Hollow Marshes for the umpteen millionth time? Look no further: with this mod, your new game will be launched straight into Act 2!

This mod is edited from SimranZenov's Start in Fort Joy. He deserves most of the credit. I'll take down this mod if asked by him on that basis. You may find the Mod Nexus version of Joyless Beginnings here[www.nexusmods.com].

Mod Features
The mod has not been fully tested beyond the boat yet: it is possible bugs may occur. If this ends up being the case, please let me know!

Known Mod Compability Issues
Custom Class Mods are indeed compatible with this mod, but usually make the player start out with Fort Joy tier armour. To circumvent this, I have written script that checks if you do not have a belt (i.e. Fort Joy tier gear) and assigns you gear based on your attributes: if you have Str 11+ upon exiting character customization, you will get Str gear, if you do not and have Fin 11+, you will get Fin gear, and if you have neither of those but have Int 11+, you will get Int gear. If no other conditions apply, you get Str gear.

Frequently Asked Questions
1. How will this mod affect quests and decisions from Act 1?

With the exception of Gareth having been rescued, the game will assume you did absolutely nothing in Act 1 barring the minimum. This means Fort Joy Arena won't have been done and you won't have rescued anyone from the ship.

2. Can I recruit the origin characters as companions? How will companion relations be affected by using Joyless Beginnings?

Yes. In this strange timeline, the origin characters are alive and well. As far as they're concerned, they've only just met you. Some may give you grief over leaving them to drown, but this doesn't really affect your relationship with them or their recruitability.

It goes without saying that you can't do the Act 1 parts of their origin stories, but the rest of their stories should function just fine.

3. I'm having an issue with your mod! Do you know anything about this?

If at all possible, please reproduce the issue without other mods enabled - especially if there's no obvious link to my mod, such as an NPC breaking while talking about something that should have happened in Act 1. If the problem persists, please let me know.

Furthermore, when reporting an issue, please tell me roughly how many other mods you had enabled.
< >
132 Comments

Gatwood May 22, 2019 @ 9:53am
Thanks for the help! I'm using the correct version of your mod now. Still not working, files are in the right place, triple checked. I KNOW I'm doing something wrong, can't find it/out yet but I will. Again, you guys are awesome!

Kalavinka  [author] May 21, 2019 @ 3:12pm
Even the ahem was a bit more passive-aggressive than I usually do! Thanks for your understanding.

It might be an issue if you have the non-DE version installed. Sorry, I don't know anything further on that, but it's possible they clash somehow.

Gatwood May 21, 2019 @ 12:43pm
Thanks for only the "Ahem", I know you coulda ripped me a new one. I have them both installed/subscribed. That's an "issue" insn't it? Either way i can't get any of the other mods to work. Dunno what i'm doing wrong. Also thanks for all your awesome modding for the community!