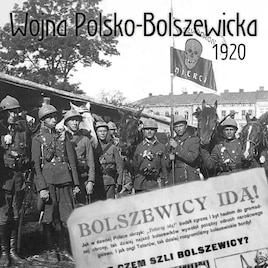 This item has been added to your Subscriptions. Some games will require you to relaunch them before the item will be downloaded.
In 1 collection by Dan Nicolaescu
GemTechStudios Collection

7 items
Description
TRIGGER WARNING FOR ANY COMMIES (BOLSHEVIK SCUM) IF ANY OF YOU COMMENT SAYING THIS CAMPAIGN PACK CHANGES HISTORY AND THE SOVIETS WERE ATTACKING TO DEFEND THEMSELVES AND ANY INSANE IDEAS LIKE THAT YOU WILL BE THROWN FROM A HELICOPTER AUGUSTO PINOCHET STYLE, thank you. (also you can play your own campaign if you don't want to see Poles killing your own)

Be sure to check out MajorColt's channel via right here to get early insight into new missions before public release:
- link - https://www.youtube.com/MajorColt
The Polish-Soviet War 1919-1921 campaign pack takes the player through the war that was fought between the Second Polish Republic and the Russian Soviet Federative Socialist Republic (Russian SFSR) that reached its climax in the summer of 1920, in this pack the player will be able to play various defence and attack missions from the perspective of both sides. THIS CAMPAIGN PACK REQUIRES THE CIVIL WAR IN RUSSIA 1917-1922 MOD
___________________________________________

Whats Inside (So Far)

Wojsko Polskie Campaign 1919-1921
Battle of Zadworze 1920
- This was a Polish defensive battle at the village of Zadworze that was historically fought between 100s of Polish Volunteers and the 1st Soviet Cavalry Army, that resulted in a Pyrrhic Soviet victory. It is recommended for this mission that you play on hard difficulty.

One of the many roads to Warsaw 1920
- This is a defensive mission set in a non-historical battle east of Warsaw in August 1920. It is recommend that you play on normal difficulty for this mission.

The Charge at Ossow 1920
- This is a offensive mission set during the historical battle that took place at the village of Ossow, the red army had captured the village during the day but by the evening had been driven out by the polish charge mainly made up of volunteers from Warsaws education section.

Why can I not move field guns and howitzers? - Use 4 men to crew them instead of the normal 2 men required in vanillia or other mods.

Das Rhienenfuchs
- Main mapper of this campaign pack, aims to create maps based on historical battles yet they always have to be eddited for a few hours to make sure they are high enough quality for missions :D

G³N³
- One of the best mappers I know in the entire modding community, makes great high quality maps for our campaign packs.

MajorColt
- Youtuber I have special relationship with, gets early access to my missions before public release to help grow his channel.

Herr Johny
- Is a extremely OP artist that edits images for me credits to him for thumbnail of the workshop items.

abracadaniel02
- Is mapper, makes extremely good maps and puts alot of time and effort into creating maps for multiple map packs. Please check out his other works here! - http://steamcommunity.com/profiles/76561198207873467/myworkshopfiles/ -
Popular Discussions View All (4)

It was claiming to be buildings towards Communism and was certainly socialist, both by Marx's definition and by that of the older socialists like Saint-SImon.

"Communism has no state,"

This is only correct if you believe Lenin's modifications on Marxism. Marx in fact did describe "Low Stage Communism" as having a state, albeit a "Workers' State." Lenin essentailly changed the terminology.

" the Soviet Union did."

Which Marxism and its Leninist heirs viewed as necessary for the evolution to Communism.

Which gets into the endless problems of how to transition from "Early Stage Communism"/Socialism to True Communism.

saspekt Jul 15 @ 11:05pm
hi, is it still working for someone? i changed mod.info but without success (its still garyed). thnaks

Turtler May 14 @ 9:17am
@Тк Имперский "But Poland have never even denied attacking belorussian and ukranian SSR... Like... Why are you even offended by that? The what????"

That happened months and Months after the initial conflict caused by Bolshevik forces marching Westward and attacking everybody they came into contact with. Indeed, one of the impetuses for Pilsudski's decision to support an attack on Kyiv with Petilura was the Bolsheviks refusing to negotiate converting the ceasefire they had into a more lasting peacedeal.

Тк Имперский May 3 @ 4:19am
But Poland have never even denied attacking belorussian and ukranian SSR... Like... Why are you even offended by that? The what????

rakovsky Apr 1 @ 11:31pm
I just tried playing COOP mode for two missions and neither one worked. I chose SKIRMISH and then selected the map in the Multiplayer menu. The mission loaded up fine, and the units for each side showed up on the map. The units for both my side and for my human ally showed up all in Green, however, and I was not able to select them or give them orders because there were no units in blue on the whole map.

When I played the Kiev mission in Single Player, however, the mission worked fine. I had the same problem when playing COOP on:
- Counter-Attack at Kiev 1920
- Battle of Zadworze 1920

This problem showed up on both maps that I played in COOP.

rakovsky Apr 1 @ 7:48pm
I am looking for someone to play the Soviet mission with in COOP mode.
Please let me know if any of you are interested.
< >