Store Page
Stellaris>  Workshop > Jawa's Workshop
This item has been removed from the community because it violates Steam Community & Content Guidelines. It is only visible to you. If you believe your item has been removed by mistake, please contact Steam Support.
This item is incompatible with Stellaris. Please see the instructions page for reasons why this item might not work within Stellaris.
Current visibility: Hidden
This item will only be visible to you, admins, and anyone marked as a creator.
Current visibility: Friends-only
This item will only be visible in searches to you, your friends, and admins. 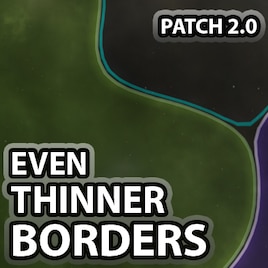 Jawa
Offline
See all 605 collections (some may be hidden)

This item has been added to your Subscriptions. Some games will require you to relaunch them before the item will be downloaded.
Description
Alternative version of Thinner Borders which reduces empire graphical border width to 25% of vanilla.

Very simple mod which slightly modifies the border shader file so that the new borders are roughly 25% of vanilla width.

While I like how Stellaris now has a seperete border coloured by empire secondary colours, I found the vanilla border too thick and made the game look very cluttered when zoomed out. This mod retains the zoom effect. As an added bonus I feel like it enhances the feeling of scale to the game.

Only downside seems to be that borders seem to overlap a little (see screenshots).