Store Page
Tabletop Simulator>  Workshop > Mr McChew's Workshop
This item has been removed from the community because it violates Steam Community & Content Guidelines. It is only visible to you. If you believe your item has been removed by mistake, please contact Steam Support.
This item is incompatible with Tabletop Simulator. Please see the instructions page for reasons why this item might not work within Tabletop Simulator.
Current visibility: Hidden
This item will only be visible to you, admins, and anyone marked as a creator.
Current visibility: Friends-only
This item will only be visible in searches to you, your friends, and admins. 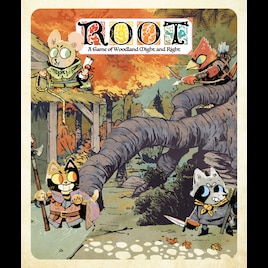 Eldin
Offline
See all 615 collections (some may be hidden)

This item has been added to your Subscriptions. Some games will require you to relaunch them before the item will be downloaded.
Description
Buy Root at https://leder-games.myshopify.com/

Or you can try the faction draft (coded by mangofeet).

Making the meeples more visible while on the map?
BranKaLeon33

Where are the Ruin Items
Frater Ambrosius

How to manipulate the ruins tokens!
Desert Punk
< >
338 Comments

sakku Feb 6 @ 4:41am
electric eyrie arent updated and dont work correctly if the rules on the board are followed

polyphemur Jan 4 @ 9:59am
@ukelix this mod is quite outdated now, the new updated Root mod is listed under Root - Ultimate Collection

no longer Russian Bee Sep 13, 2021 @ 10:15am
Could the ruins tiles say "ruins" when moused over? Just a minor thing, but friends and I keep forgetting they are there half the time.

raeofsunlight May 11, 2021 @ 7:19pm
Could you add a button that automatically sets up the walkthrough with the original four factions so we don't have to set up the tutorial every time we teach someone how to play the game? Also, could you set up the Riverfolk's hand to automatically empty into the designated public space so we don't have to move every card we draw? Thank you!
< >