Store Page
Garry's Mod>  Workshop > Ben24x7's Workshop
This item has been removed from the community because it violates Steam Community & Content Guidelines. It is only visible to you. If you believe your item has been removed by mistake, please contact Steam Support.
This item is incompatible with Garry's Mod. Please see the instructions page for reasons why this item might not work within Garry's Mod.
Current visibility: Hidden
This item will only be visible to you, admins, and anyone marked as a creator.
Current visibility: Friends-only
This item will only be visible in searches to you, your friends, and admins. 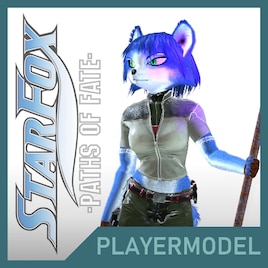 This item has been added to your Subscriptions. Some games will require you to relaunch them before the item will be downloaded.
Description
[ NOTE: This model was not created by me, but I received permission from the original creator to upload it ]

Yet another blue vixen jumps onto the Garry’s Mod Workshop.

This is tomas18/JackThorn24’s Krystal playermodel, based upon Krystal ("SF Uniform") from the dead Max Payne 2 mod “Star Fox - Paths Of Fate” . He ported the model to Garry’s Mod a few years ago, but it was never released to the public, and thus it was traded between people in private .

But now, with permission from JackThorn, I’m releasing this playermodel for y’all to use.
It’s a shame this model wasn’t released earlier, as its one of the few polished Krystal models available for GMod (with face-posing as well as utilising .vmt commands, such as $phong and $bumpmap, to make the textures look nice and shiny).

14/07/2019 UPDATE:
Thanks to Steam user _Skorpeon, POF Krystal now has VIEWMODEL HANDS! Never again will you need to look at default fleshy fists when using this playermodel.

[ NOTE: while I can confirm the viewmodel works with Garry's Mod default set of weapons, I cannot 100% confirm it'll work with custom weapons ]

By subscribing to this addon, you’ll receive:
- a “Paths Of Fate” Krystal playermodel [ Now with a custom viewmodel, courtesy of _Skorpeon ]
- a “POF” Krystal Ragdoll [ With partial face-posing and full finger-posing ]
- and Krystal's staff
[ There is no Krystal NPC included in this addon, and the ragdoll doesn’t work with LuaPineapple/prey2009’s Model Manipulator tool ]

Credit to tomas18/JackThorn24 for creating/porting this model (and providing permission to release this playermodel), and special thanks to Krystal-fan2005 (Deviant art link[krystal-fan2005.deviantart.com]) and OrbiterSpore (Deviant art link[orbiterspore.deviantart.com]) for preserving this playermodel for the past few years.
Special thanks to _Skorpeon (Steam profile) for creating the custom viewmodel/c_hands (sorry it took so long to add it to the workshop version).
Also, credit to OrbiterSpore and SpaceDog (Steam Profile) for providing images to help showcase the model (credit has been given where its due). Thanks.

I probably could... but I don't have the time or interest to do it.

If you want to do it yourself (and spend several hours reassigning bones and checking the model in-game to make sure it works fine), be my guest, although if you intend on releasing it for the public, I recommend you get in touch with the model's original creator, JackThorn24, and ask for permission to edit and re-release his model (just in-case).

Yaboi Oct 5, 2019 @ 7:24am
I mostly just mean turning models into PMs, not really the whole creation of the model.