Store Page
ARK: Survival Evolved>  Workshop > Kraken:1's Workshop
This item has been removed from the community because it violates Steam Community & Content Guidelines. It is only visible to you. If you believe your item has been removed by mistake, please contact Steam Support.
This item is incompatible with ARK: Survival Evolved. Please see the instructions page for reasons why this item might not work within ARK: Survival Evolved.
Current visibility: Hidden
This item will only be visible to you, admins, and anyone marked as a creator.
Current visibility: Friends-only
This item will only be visible in searches to you, your friends, and admins. 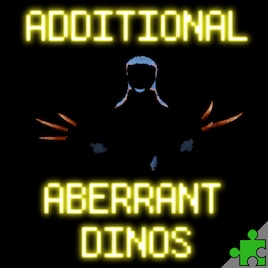 Kraken:1
Offline
See all 1187 collections created by Kraken:1 and other people (some may be hidden)

This item has been added to your Subscriptions. Some games will require you to relaunch them before the item will be downloaded.
In 1 collection by Kraken:1
Krakens Lair Community Server Mod Collection

All additional dinos have the Aberrant health reduction and damage increase, as well as the snazzy glowy light effects that we all love, all are breedable, lay eggs and all that jazz.

As the new Aberrant versions are unique to this mod (with the exceptions of the Megalania, Spider and Dimorph which were added to the game files but unused) removing the mod will also remove any of these new creatures.

Not all new additional creatures are immune to radiation, those that aren't will be noted.

Other than the above mentioned I will not be giving any additional creatures any new or unique abilities, they will be identical to their vanilla counterparts other than being Aberrant.

All additional creatures are added to the existing Aberration spawn containers. If there is a creature included in the mod that you do not wish to be in your game for whatever reason feel free to remove it in the usual way using your Game.Ini

Please do not spam the comments asking for this creature or that creature, eventually I will get around to creating and adding Aberrant versions of all vanilla creatures, yes including fliers, with my priority being given to those that I feel best fit the map.

Additional Aberrant Creatures Currently in the mod;
Creatures immune to Radiation are marked with a (R)

Aberrant Allosaurus (R) - Rare Spawn in the the Elemental areas

Aberrant Rock Golem (R) - Rare spawn in Elemental and Surface areas (Added Element Ore to foods, can be used to tame with the same effectiveness as Sulfur. Added Red Gems to harvest component)

Aberrant Quetzal - Very rare spawn in the Fertile Areas, will only ever be one wild on the map if any at all

Night Wyvern (R) - Spawns on the Surface, drops eggs, raised with milk the same as other Wyverns. Limited to 10 per map (adjustable by .Ini)

Aberrant Ammonite (R) - Spawns in the waters of the Biolum Areas

Element Dust Jugbug - Spawn all around the map, can be harvested for Element Dust

Aberrant Deinonychus (R) - Uncommon spawn in the Bio-Lum, will drop eggs and make nests wherever they spawn, no fixed spawn points. As I was able to use the correct Status Component that WC added to the Deinon but neglected to use, Aberrant Deinons will naturally have 75% more base health and double the Stamina of their Valguero counterparts.

Next Aberrant Creatures to be added to the mod


'But Kraaaaaken' I hear you cry right now, 'you've added a Mantis and Mantis eat Deathworm Horns and there's no Deathworms on Aberration so we can't tame them. You suck!'

Well, suck I may, but that doesn't mean I didn't think of this! The mod also adds Edible Crab Claws to the death inventory drops of Karkinos. Not only do Mantis' of all types find them delicious, but you can also use them as a replacement for all types of horns in the recipe for Broth of Enlightenment.

As of this latest update, the whole no Deathworms thing, isn't true anymore! Go up to the surface and get you some! Or, just keep using Crab Claws, up to you really

The subject of fliers on Aberration has been a hot topic, and therefore I have made my statement on this mod and fliers here: This Mods Policy On Fliers and how to remove them if desired


If your server is awesome to be running this mod and you'd like to advertise it, please do so here: Server Advertising

Many thanks for taking a look at and subscribing to this mod, if you like it don't forget to give that Like button a good ol' clicking, and why not check out my other mods too!

As always, I raise a glass to my homies over at the Ark Modding Discord, whose wit and wisdom occasionally sinks in. Big thanks to my main man UpFromTheDepths for all the support, and Eyaexiu Oli for just being such a massive help and wonderful person.

And a massive, massive, gargantuan THANK YOU! to my fellow mod creators Myrmecoleon and Lethal without whose help large parts of this mod just wouldn't work!

For up to date info on my modding endeavours, including update announcements, sneak peeks, and other stuff, join the Kraken's Lair Discord server here:

Massive love to all my Patrons and donators, and a special thanks also to Eclipse for providing some beautiful screenshots.

mxforlife Nov 21 @ 2:52am
When you say the Aberrant Megatherium is a "Very rare" spawn how rare do you mean? I have done several DestroyWildDinos and checked the savegame with Ark-Dino-Info (https://github.com/dmnhard/ARK-Dino-Info) and not a single one have spawned so far. I can spawn them with a console cheat and all the other dinos from the mod spawn.
Do I need to manually add it with a ConfigAddNPCSpawnEntriesContainer?

Aussin Oct 24 @ 2:20pm
For people asking about custom maps like valguero or other maps that have abberation areas, if you add this mod and they don't spawn, if you're an admin/in singleplayer, you can use the Simple Spawners mod to add the new creatures this adds manually!

Zera_Fox Aug 30 @ 6:24am
Is there a list or something about the Downloads Array somewhere now? :P

Hazearil Aug 15 @ 6:55pm
Valguero iirc uses some of Aberration's spawners, so some will be there, but not all.

Doomslayer Aug 15 @ 2:40am
i dont have any wyverns spawning

Raagin Jul 28 @ 2:28am
@kraken Or the night milk wyvern for adolescence?