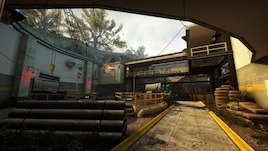 Habboi
Offline
See all 484 collections (some may be hidden)

This item has been added to your Subscriptions. Some games will require you to relaunch them before the item will be downloaded.
Description
de_cistern for CS:GO by

Hi all, de_cistern is a defusal map for the game Counter-Strike: Global Offensive. It is set in a water facility and supports up to 16 v 16 though as it currently stands you'll get low framerates due to how detailed the map is. We may work on a less detailed version in the future depending on how well received the map is.

This map has been in the making for 8 months and contains lots of custom content that I made myself. Because of this the map is considerably large (300mb). Thank you for your understanding.

I'd like to thank all those that helped test it and to those who wrote tutorials on making loading screens and radars etc. Thanks a lot!

Overall I've put a lot of effort into this map and it is thanks to Richard that I was able to work on this project so big thanks to him.

Enjoy the level and please leave us feedback whether it's positive or negative, it all helps in the end.

Also I made a .pdf called "The Making of de_cistern" which contains all the things I did and also documents how I got flow maps to work among other things. Please feel free to read it!

Player Factions are set to default when they are meant to be SAS vs. Professionals. If you want to fix it you need to add a .KV file in the maps folder. You can download mine here:

Q. How to install?

A. Click the subscribe button and what that does is it subscribes your Steam account to my level and from then on any updates I make to the level are automatically added to your game. So if I decided to put a giant chicken in bombsite B you'd all receive that change. To play the level either choose play offline with bots and choose the map in the selection screen or manually load it using the developer console by pressing ` and typing map de_cistern_b1.

Q. What's up with the doors?

A. I wanted to see if people would use them as cover by crouching behind them and shooting through the glass windows. By making them individually open and close I predicted people would use more stealthly methods and close them to prevent the other team realising where they were. It's also an unknown fact that the doors can be "destroyed" if shot enough times. Obviously in a B2 I'll remove the doors entirely as it seems they only get in the way.

Q. Why is the map so stupidly detailed and full of clutter?

A. I'm unemployed and have been trying to work in the games industry for 10 years now. This was meant to be a portfolio example of my skills and ability so that I could get a job. I never once had professional tournaments in mind when detailing the level. Suffice to say I can appreciate a simple, clean level and why people prefer it however a plain level would not have looked good on my portfolio. So what now? Well we may release the source files one day so that someone else can make a plain version OR maybe we'll do it, who knows? Time is limited and I can't spend time on something that wont get me a job.

A. Yeah mine too. Well kinda. I get 60FPS on a GTX 285, 4GB RAM PC and I know for some that's poor. Keep in mind the map is in beta and we've optimised it a great deal but in the end it may be the large amount of detail that's bogging it down. Either way it is fixable given time and like I said we may make an SE version with less detail.

Q. There are several error messages in the console like missing sounds and audio channels etc

A. Cistern quite literally pushes several of the Source engine limits such as sound and overlays / decals. Because of this the particles are removed by the game to give precedence to player models which I assume have their own effects parented to the mesh. Also despite the error that there are missing sounds it's a false error. Those sounds do exist but it appears the game wants to moan about it anyway. As for the audio channel error that's because I used a load of ambient_generics when I should have used soundscapes so as a result the game hits the max sound limit. It's nothing to worry about so relax :)

A. Well technically that's the time from when I added Richard to my friends list to the day we submitted the map on FPSBANANA. I didn't work 24/7 so the actual estimate is unknown but I like to think it was 5 months :) You would not believe the problems I faced, models not rendering, particles disappearing, sounds causing mass errors due to there being too many of them (300 vs just 30) and of course there was a "LOT" of transparency fighting. Things like glass windows and decals were fighting each other to render causing mass glitches. Oh the sleepless nights were such a pain but I pushed on and the result is this map. Some would say this map is "stunning" but I don't see it. You know they say the creator is his own worst critic but if I were to point out what I think is wrong with the map maybe you'd see it my way. I actually consider Dear Esther a fine example of stunning level design though I do appreciate the positive feedback, I mean who doesn't like their ego rubbed a little eh? :)

Q. Why the default CT's and Terrorist models?

A. Seems the workshop needs work. I supplied the .KV file so that it would be SAS VS professionals but meh looks like it hasn't worked. You can download a fix above in the "Important" section.

A. Well I'm certain this will be my last Source project. No offence to Valve but Source is outdated SDK wise and working with UDK has shown me how limited it is. Did you know lighting Cistern took 3 weeks to get right whereas in UDK my current project took a day because I could preview it in realtime? At the moment I'm working on an indie game (A Hat in Time) for UDK so the odds of a B2 are slim UNLESS we get a good reason to do it like say if the map were made official by Valve or we were offered a paid freelance job to fix the map. Who knows, the future is uncertain. Thanks though for taking the time to try it out and for all those haters out there, let me know why you hate it please. I'm not the type of person who gets offended by troll comments so you're only wasting your time :)

Player Factions are default when they are meant to be SAS vs. Professionals. If you want to fix it you need to add a .KV file in the maps folder. You can download mine here:

Fire sound in t spawn but no fire.
Particles vanish when more than one player joins the level.
Water looks "crazy" when playing on low shader settings. (This cannot be fixed)
Doors "need to die" and be reborn as normal doors.
Bombsites do not break, this is intentional as this is a B1 release and it takes a lot of effort to animate destruction.
Some ladders aren't climbable.
One of the power boxes is glowing more red than in the pictures.

Saftle, Strider and the rest of the TWHL Forum crew for testing the level.
Popular Discussions View All (1)

We play a lot of other very good maps, including most of the Operation maps. Please have a look here for other maps on the server