Store Page
Tabletop Simulator>  Workshop > Pullahoko's Workshop
This item has been removed from the community because it violates Steam Community & Content Guidelines. It is only visible to you. If you believe your item has been removed by mistake, please contact Steam Support.
This item is incompatible with Tabletop Simulator. Please see the instructions page for reasons why this item might not work within Tabletop Simulator.
Current visibility: Hidden
This item will only be visible to you, admins, and anyone marked as a creator.
Current visibility: Friends-only
This item will only be visible in searches to you, your friends, and admins. 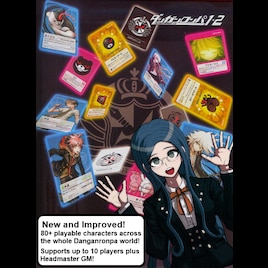 RJWaters2
Online
See all 78 collections (some may be hidden)

This item has been added to your Subscriptions. Some games will require you to relaunch them before the item will be downloaded.
Description
A Mystery Card-Game where one of you is the killer - find out who, and vote them to be punished!

**DON'T FORGET TO RATE THIS MOD IF YOU LIKED IT!**

This is an English/Spanish/French/Russian translation of the Dangan Ronpa card game (based on Werewolf/Mafia).
This includes the entire base game, plus homebrew for Danganronpa V3 characters and more, and some select expansion cards from the Maniax expansion.

**Note** this is not a 1/1 recreation of the original game. There is LOTS of added homebrew, tweaks to character cards, expanded / alt abilities, more items, more roles, Despair Disease variant and etc; all of which were a result of over 3 years of play-testing and modification. If you want to see the ORIGINAL cards as they were in the original game, look inside "Junko's Toychest" for "Classic" items, characters, and roles. Be warned - some of the old abilities are pretty busted!

The current table setup supports up to 10 max players plus 1 Headmaster.

Atmosphere!
It's like you're really playing in the Danganronpa class trial room! Lots of features making the game fun and easy to play!

Lots of Homebrew!
Features the entire cast of DRv3, and spinoff cards for Ultra Despair Girls, Danganronpa IF, and expanded characters from Danganronpa 1 and 2! Includes all original role cards, plus HOMEBREW role cards such as Ultimate Hope!

Emoting Character Trophies
Press your "Get Capsule" button to draw character trophies from the Monomono Machine! Mouse-over the big trophy and press the number keys to emote, just like in the game!

Automatic Token Setup
Once a player's character card is in place, press the 'Get Capsule' button to get their tokens and setup voting automatically!

SECRET VOTING
Press the "Vote Time" button to bring up voting buttons behind each character. Players can use this to cast votes secretly. Press the "Punish" button to pick the punished!

If you like the MOD, be sure to rate it!

Credit to OkamiSP who scanned the base game and uploaded the Spanish version of it.
https://steamcommunity.com/sharedfiles/filedetails/?id=829918095&searchtext=danganronpa

Round Table via: https://steamcommunity.com/sharedfiles/filedetails/?id=1317977244

Miyuki, Ultimate Cupcake Lunatic Sep 21, 2020 @ 9:54am
An intricate and highly customizable game, Dangan Werewolf allows for players to enjoy vast extents of replayability with each match. There's a unique character for everyone, from the normal girl Komaru, to the enigmatic Kokichi, to even headmaster Monokuma himself. A wide variety of roles and item cards keeps each game interesting, as well as allowing for clever strategies and setups. In tandem with a lovely community centered around this mod and active developments, Dangan Werewolf is second to none when it comes to enjoyability and content.

Ramirez Jun 24, 2020 @ 10:06pm
Just the fact that I have met so many new friends over a single mod in TTS should tell you everything you need to know about this game. And to anyone that reads this feel free to join us and have some fun. Who knows you might pick up some more friends while you try and figure out who the blackened is.
(3/3)

Ramirez Jun 24, 2020 @ 10:06pm
Don't let the sheer size and complexity of the game turn you away watch a few games if you aren't sure of what is happening and you'll get it really quickly. Yes it can be confusing as hell when there are items and abilities flying around faster than you can blink, but after a bit you'll be part of those frantic mid-days.

And with regards to the community they are some of the nicest people that I've met and quite possibly one of communities I have been a part of. We host games for new players with less complex role setups and tutorials for those that are brand new to the game. We do theme games and games where we RP Danganronpa characters, (Look up Pullahoko's video for the School Festival game, where I RP as Nekomaru.) We've even branched out a bit and started doing murder mystery VR games in VR chat which are extremely fun too.
(2/3)

KaiButt Jun 24, 2020 @ 10:05pm
Spin-off werewolf based on the series danganronpa, if you are on the side of hope you gotta hunt for the blackened, and if you are on despair you must keep the blackened from being caught! Offers a large section of characters to play and roles to defend/uncover the blackened! As with anything with a large amount of characters,roles, and items to tweak, some of these things can definitely be rough around the edges balance wise. Though, in a way, this can cater headmasters to a hope unbalance or a despair unbalance depending on the players! (More vets might figure out the blackened easier, while new players would take their time figuring stuff out). Also, if you have a creative itch for a role/item/character (even one not in danganronpa) you can also make your own! The community is also really great in finding games, and they try their best to welcome new players into it.

Ramirez Jun 24, 2020 @ 10:05pm
So I've been a part of the Dangan Werewolf community since January of this year and I have to say it is one of the best communities I have ever been a part of and I wish I found this game and the community sooner.

When I joined back in January I was extremely nervous about playing with all the veteran players afraid I was going to do stupid stuff and look like an idiot in front of everyone, but I took a dive in during one of the games Pullahoko was hosting and while I probably didn't say a word most of the game I was hooked after my first session with everyone and even built up the confidence to host games and GM myself which was a daunting task at first.

The sheer amount of effort that went into this mod is absolutely amazing and is constantly being updated with new changes and balancing fixes. Some of which I am even able to voice some opinions in to help make the game more fun, like Ball Monokuma which I had a bit of a hand in making a change for as well.
(1/3)

T.TV/Sir_Grimmothy Jun 24, 2020 @ 10:03pm
This mod does so much for me as a Danganronpa fan, tabletop gaming fan, and deception type gaming fan. The mod itself is already a blast and has so many things that will make a fan of any the above things I described happy.

The best part about this mod however isn't the mod itself, even though it's fantastic, the community and discord server is a wonderful place to be full of amazing people.

If you like Danganronpa, or deception type games, download this mod and join the server, I guarantee that you will enjoy yourself. I haven't been there for long but it is such a welcoming environment.