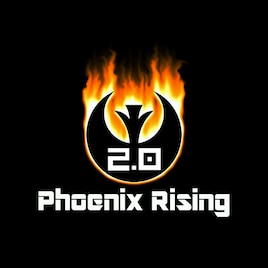 evilbobthebob
Offline
See all 189 collections (some may be hidden)
You need DLC to use this item.

This item has been added to your Subscriptions. Some games will require you to relaunch them before the item will be downloaded.
Description
Phoenix Rising is a complete overhaul of EAW's mechanics, introducing new economic and production options, many new units, and a technology system that allows you to research and upgrade new units individually. Phoenix Rising is set in the Legends universe, during the Galactic Civil War.

- Play the Galactic Civil War your way from 18BBY with the full range of tech in the sandbox campaigns.
- Experience the lead-up to A New Hope from both sides of the Galactic Civil War, as told in the Legends universe, in the Operation Skyhook campaign.
- Capture or defend Coruscant in the Road to Coruscant.
- Defeat Thrawn's attempts to reassert the Empire or fight with him to eradicate the New Republic in the Thrawn Campaign.
- Unite the warring Imperials or liberate the galaxy in Imperial Mutiny.

- Play the Galactic Civil War your way in the 18 BBY sandbox campaigns with the Rebels, Empire or CSA
- 50+ buildable land units, 85+ buildable space units, with 4+ upgrades each
- 160+ heroes, many with upgrades
- Countless Independent and special starting forces units, some buildable in unique locations
- Research technology from the end of the Clone Wars through to the Yuuzahn Vong War.

- Sweeping optimization improvements, including a "light" campaign for those having performance problems.
- Rewritten galactic conquests
- Rewritten AI to be more intelligent and challenging
- All hyperspace travel now done via hyperlanes, with bonus speed and income from different sizes of route
- Complete overhaul of planet locations, bonuses, and abilities
- Over 50 new ground maps for v2.0, many new space maps
- Both land and space skirmish are available (though land skirmish is still unfinished for the CSA)
- Space skirmish has been completely rebalanced to be more of a competitive experience


For a full changelog, visit www.eawpr.net.

Subscribe to the mod! That should be all you need.
Recommended: install onto an SSD and use a CPU with good single-core performance for best results.

Even though the mod has been optimized, it may still take some time to load.

falvarez007 Jun 11 @ 4:06pm
Not sure if my game is glitched or bugged but how many heroes does the CSA have at most? Because I only have 4 and I feel like its a lot more than that. :/

tavin44 May 22 @ 3:38pm
no i didnt know that..i thought it was all the actions that made it slow..well was a great idea i loved having lvl 4 isd's lol

evilbobthebob  [author] May 22 @ 2:27pm
I don't think you realise that the whole reason the mod runs slowly is the upgrade system. Therefore adding it to any other mod gets you the same result.

tavin44 May 22 @ 1:27pm
If they could add just the upgrade options to Thrawns that would make this mod obsolete.cuz thrawns runs way smoother.

caferra400 May 22 @ 10:40am
@tavin44 Well thanks anyway; he may come back though, he is dev on Thrawn's revenge team and doesn't work this mod anymore because of time constraints and he feels it's complete.

tavin44 May 21 @ 5:14pm
@Caferra400 he may have limited the upgrade options on the smaller maps..but if its broken it wont be fixed..he is no longer working on the mod.

caferra400 May 21 @ 9:53am
@tavin44 I know but in the main campaign, you can promote him to warlord from admiral/Grand Moff(he gains iron fist at the admiral rank). In the inner rime campaign, he just goes up to admiral with iron fist.

tavin44 May 20 @ 8:51am
I think thats as high as Zsingi can go..the executor is his flagship..and there is no bigger ship

caferra400 May 20 @ 8:38am
@tavin44 yeah I made sure of it. In the case of Zsinj I had him in orbit with a level 5 station(His rank was admiral with Executor Iron Fist). I am not sure if ground buildings have anything to do with it.

tavin44 May 19 @ 9:18am
Caferra did u have the hero in space..usually u can only upgrade heros if they are in space about a planet with the right building.
< >